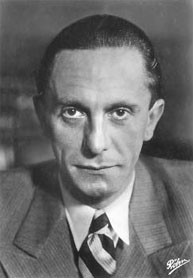 By Joseph I am referring to Joseph Goebbels, Adolf Hitler's master propagandist. Now why do you think I would go to the extreme of comparing some Republican commentators to a sworn NAZI? Too many parallels, for one.

Have you ever heard this mantra: "Tax and Spend Democrat". Or how about this one "Liberal Democrat". It has become almost a reflex for Republican commentators to tack on those descriptive words to the word "Democrat". If you have no problem with this, then my point is proven as you are a victim of what was once called "the big lie". Originally described by his mentor Adolf, Goebbels honed the technique to a fine edge that is best described in an OSS report on Hitler's psychological profile:

". . .never admit a fault or wrong; never concede that there may be some good in your enemy; never leave room for alternatives; never accept blame; concentrate on one enemy at a time and blame him for everything that goes wrong; people will believe a big lie sooner than a little one; and if you repeat it frequently enough people will sooner or later believe it".

Does any of this strike a familiar chord?

One thing is certain, there is active application of the above credo nationwide this year, and closer to home, in my congressional district. In Texas Congressional District 22, Democrats nominated a moderate Democrat, Nick Lampson, to oppose conservative extremist Tom DeLay (oops, did I just do it too? Nah, if the shoe fits . . .). Whenever Republican commentators describe Nick's politics, they inevitably reach in and pull out "Liberal Democrat". Anyone who has heard Nick speak knows that is an outrageous lie. Nick knows that working with the opposition through negotiation is best done in the center, not by shouting and pointing from the extremes of the party. Another outrageous lie is that Nick is a "Tax and Spend Democrat". Here, Nick has 8 years of congressional experience where he is on the record as a fiscal conservative. Recently he has even decried the pay raise that "Borrow and Spend Republicans" have given themselves (and their peers across the aisle).

And no, by comparing Republicans to a NAZI, I am not saying that they are all a bunch of murderous, nationalistic expansionists - well not all of them anyway (it's a joke, dummy). But NAZIs were very effective, in their time, at bringing a lot of people to come around to an extremist view of the world. And there are some familiar chords in all of that, too, don't you think?

Why not Half Full?

Because it was already taken. Apparently there are lots of optimists out there. So pessimists don't blog?

Anyway, why am I doing this? Maybe it is so I can cybervent.

I want to go on record that I am anti-war and have been since I was of draft age. Yes, a pessimist pacifist. It's a special new kind of pacifism though. Being Anti-War in the "old days" meant that you objected to taking of human life for whatever reason. Now, I think it means being against a War of Choice. I want to see a paradigm shift take place in the United States. We should be a nation that goes to war when we have no choice, when all alternatives have been exhausted. Only then should we put our soldiers in harm's way.

I really think that it speaks volumes to the world that US public opinion on the war in Iraq has shifted radically since just early this year. What drives a shift like that? Realization that Americans have been misled? Casualties? Government misconduct and mismanagement? Probably all of that and more. Amazing isn't it? It took a decade for Americans to start to come around and realize that the Vietnam War was illegal and immoral (and unwinnable besides). In my pessimistic fashion, I credited the turn of the tide back then to the fact that there was a draft and people were more concerned about self preservation (or that of their sons), than the fact that the Vietnam War was a War of Choice that was forced on people who were unschooled in the issues. In my pessimistic fashion, I thought that it would take a reactivation of the draft to get people in this country off the dime. Not so, not so.

So in a quite uncharacteristic optimistic fashion, I now have some hope that we can bring this foul and immoral war to a swift conclusion.

We have opened a Pandora's Box over there, and unleashed some demons who were held at bay by Saddam's repressive regime. These demons were there before America invaded, and will be there for the forseeable future. But we added to the pile - America created another demon. Anyone who has spent any time in a Muslim culture knows this is true: our mere presence in that country is the catalyst that stirs up the demons. You need to look at it from their point of view: Americans are infidels, you see? Iraqis are a proud and (sometimes) religious people who have been disgraced and defiled by the continued presence of an infidel invader.