Blake Farenthold, a Corpus Christi attorney/businessman/Teabagger, is some kind of lucky duck. First, Farenthold emerged last April out of a crowded pack of 4 Republican contenders who sought to take advantage of the perceived disaffection with the Democratic majority in DC and challenge 27-year congressional veteran Solomon Ortiz.
Back then Farenthold came out second from the top in the March primary with 30.12% percent of the vote, and then he ran in a runoff election against the top vote getter in the primary, Corpus Christi realtor James Duerr. In that low turnout runoff election Farenthold edged Duerr by 246 votes, giving him the nod to mount a campaign to challenge Congressman Ortiz of Texas’ 27th Congressional District.
What a lucky duck.
And now, on the weekend before Early Voting begins in the mid-term election, Blake Farenthold has been vaulted to the national spotlight. His smiling face has been dashed across national blogs like HuffingtonPost and Talking Points Memo as well as mainstream media web pages like New York Magazine’s. 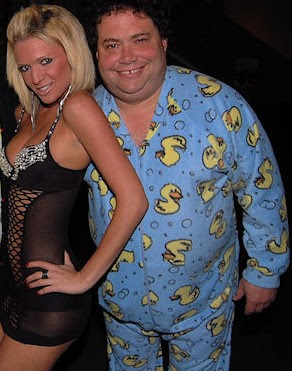 Yes, that is Blake Farenthold, his smiling face, his Lucky Duck pajamas, and a local Corpus Christi “CrushGirl” hottie in black lingerie. The photo was taken at a Corpus Christi nightclub, the Aria Sky Terrace and Lounge during “Tellie’s 3rd Annual Pajama/Lingerie Party for Charity” that took place just after Christmas last year.
He certainly looks like he was having a great time.
Most recently, I have seen that Farenthold has been brow-beating Congressman Ortiz, calling him a “chicken” for not debating with him, his latest stunt being to launch a website and hand out rubber chickens.
And it seems to have worked because we now find that Ortiz and Farenthold will be in a live debate this coming October 26th at 5 PM on Corpus Christi’s KIII Channel 3.
So that ought to be fun, especially if Farenthold shows up in his Lucky Duck pajamas. I wonder where do you find pajamas like that in Corpus Christi Texas in size 4XL.
Ortiz has proven that he isn’t the chicken that Farenthold said he was. I just wonder now which candidate is the one with the egg on his face.
Posted by Hal at 2:18 PM

what if you wrote a blog ranting and raving and no one cared.
umm ummm ummm Obama

Except 55% of my hits today was on this story. My hit count is through the roof on this single story.

Funny, huh? Ortiz has two more years because of this clown's malapropism.

Thank God for human nature and the Republican Party's repudiation of same.