Barack Attack: “It’s Not About Me” 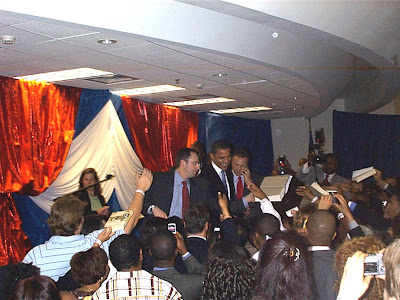 I quickly slapped together a posting yesterday about how I was going to go see Barack Obama last night in his first trip to Houston, Texas. Forever the wordy one, I rambled on and on about my antique digital camera. I was able to get one good shot of him after his speech which I have here. The stage was fairly dark and my antique camera’s strobe doesn’t have the legs to get enough photons to collide with Barack’s body. It all has to do with the inverse square law, but never mind about that.

I got there early, but Obama was late getting there. The crowd steadily grew and row after row of chairs were set out as more and more attendees arrived. By 9 o’clock, the announced time of Obama’s arrival, the crowd was at an estimated 350. Put a couple of zeroes next to that and you have the minimum haul of this fundraiser. Finally he arrived on stage at 10 PM.

Barack Obama is a very dynamic speaker. His message, in the main, was that he was in the race for his country. His now often quoted aphorism “It’s not about me, it’s about you” was repeated several times. His speech was interrupted several times with applause, and all around me I could hear people saying quietly to themselves “that’s right”.

He attacked the Bush administration at all the weak points: Iraq was prominent not only in our losses but in the now half a trillion dollars wasted there. His impassioned arguments for universal health care found no one disagreeing. Several times he addressed the administration's misplaced priorities in the Katrina catastrophe and subsequent events making the remark, specific to Houston, that Houston was still playing host to thousands of Katrina victims who even now, still cannot return home.

He made only passing mention of his fellow Democrats running for the same office. There is more said if you “Google” Hillary Clinton or John Edwards and take a look at the sponsored links on the right of the search results screen.

I was sitting there with my friend Mark who used to blog in View From 22. Mark, ever the astute political observer, made the remark that Hillary’s campaign made a strategic error in making it look like she and Obama were the titans in the race for the nomination, locked in a head to head struggle. Mark speculated that the two campaigns will grind each other down, allowing John Edwards to stroll in past the burning embers and twisted steel beams that once were their respective campaigns. All this and Mark tells me that he is an Obama supporter (Don’t tell his mama).

I told my friend Don on the way there that I really didn’t care who was the candidate as long as they were mean. No more nice-guy-take-it-on-the-chin-take-the-high-road candidates. This election will be part two of bringing some heart and soul back to America. If you have to be a mean so-and-so to do it, let’s get mean.

Hey! You didn't even invite ME to go with ya! Oh well, maybe next time.
Mark my words, Edwards will win the race. I really don't have anything against Obama, I'm just being realistic and can see the big picture here.
btw, good article and decent pic! :)

Obama will be the next president of the United States of America! I am so excited about campaigning for him. I wear buttons and t-shirts; I also have his bumper sticker. I tell people about him everywhere I go. I am giving my time, insight and money to his campaign. I urge others to find out more about him and join the effort. Obama in '08. Hilary and John Edwards are the past, I look forward to Obama and the very bright future of our great country!!!