You couldn’t have asked for a nicer day than yesterday, May 19th 2007, for an outdoors event in Sugar Land. The Fort Bend Democrats had another fundraiser in Eldridge Park at the Gazebo. Texas Democratic Party Chairman Boyd Richie was the invited guest speaker.

Barbecue was on the menu.

Vince’s Texas Mix CDs were the musical entertainment. Vince told me that not one of the musicians on his CDs was from out of state. Oh, well, no Beach Boys. But then I had to ask: “You got any Kinky Friedman on them?”

I took photos during the chow down. Look, we had lots of good Democrats attend this. 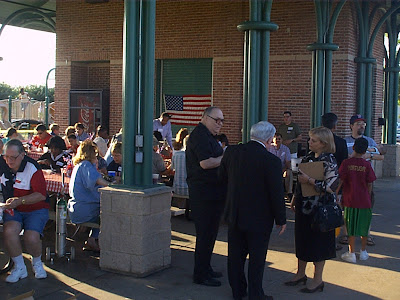 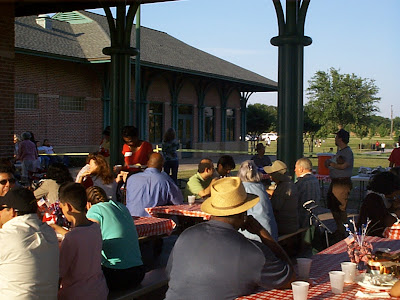 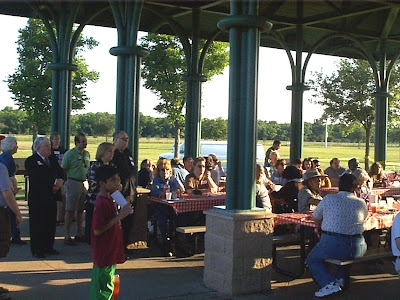 Then Don got up with some announcements. 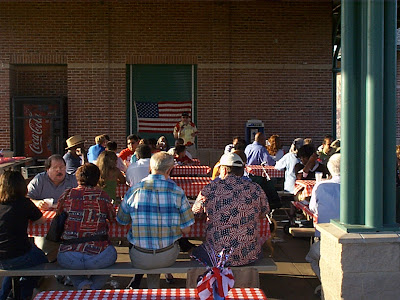 That’s my flag taped to the concession stand window shutter. Last time we had one of these fundraisers, someone thought we should all say the Pledge of Allegiance. So we all stood up and looked for the flag, and there wasn’t a flag in the room. I dove for one of the silent auction bags because I knew that it contained a stars and stripes scarf. And we all saluted that.

We didn’t pledge, but if we were going to, I wanted us to be prepared this time.

Don introduced Zaf Tahir, a Fort Bend Democrat who has moved his family back to Houston where he is now running for city council – for At Large Position 5 (his website is not up yet). 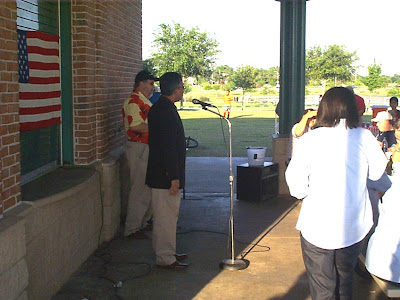 Then we got down to business and Don introduced Boyd Richie. Everyone already knew him, though because by the time he was called up, Boyd had met everyone there. Twice. 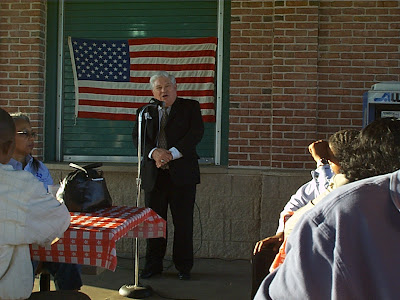 Yeah, that and the selfless dedication of Democrats across the state. People who are loyal to the party of the people. People who put the goals of retaking Texas, and retaining the political offices that we have achieved to-date, above their own selfish goals.
Posted by Hal at 4:41 PM

I think Jim Sharp said he was going to that event. Did he get to make a speech? How did he come across. Thanks for the report on the event.

Yes, Mike, Jim Sharp made it to the event. I talked to him briefly. I was standing next to a young woman who had a piercing in an unconventional place on her face and just before I was going to introduce my daughter to Jim, he spoke to her about having a bit of food on her lip.

My daughter, lately back from an English teaching sojourn in Egypt, didn't answer. She is used to it. In all of her travels, she says, the one place where people point out her personal facial piercing preferences is right here in Texas.

She was silent. I rose to her defense. I told Jim that 1) this was my daughter, and 2) that I had actually purchased the lip ring that she was wearing.

Both were true. Not true that I purchased the piercing. That, thank you very much, occurred after her senior year in high school when she took the class trip to Cancun.

While she was in Egypt, her lip ring became damaged and I bought and sent a replacement to her.

Jim made his apologies via references to his foot being firmly inserted into his mouth. Jim's a nice guy and I regretted putting him through that, but it had to be said.

Democrats occupy a big tent. My daughter is still wondering whether she fits inside it.

But no, he came after the speeches an the event was winding down.

Just to be clear: I was NOT "point(ing) out her personal facial piercing preferences" ......
she (never was told your daughter's name) was at the time in the process of eating something and I honestly thought she had foodstuff just outside her mouth in the very corner. I did not study "it" closely...just a passing glance followed by a comment to someone I believed to be a friend of a friend who, so I thought, actually had dribbled a little something and was unaware of it......the comment was intended as a courtesy to inform another of someting about which I believed they were unaware......
similar situations one might recognize would be:
"your fly is down", "your collar is up", "your skirt is tucked into the back of your pantyhose"
"you've tiny flecks of pepper/pesto/parsley stuck between your front teeth".....
granted none of these (save the last) would be easily confused for a small piece of metal looped through one's flesh toward the corner of one's mouth, but the basic idea is the same.
Again, my apologies. Valuable lesson learned: in the future I shall hone my causual glances of what I believe is foodstuff dribbling from one's mouth to consider the possiblility of a piercing.
May be too late to avoid an actual dribble of, say, ice cream, from spotting one's clothes but at least I would be politically correct (assuming my mention last week was construed as politically incorrect).
As to where she may fit in the tent: such poise and intellect is always welcome with my campaign and law offfice. And there's plenty of work to do.

I also apologize. What I should have said, in public, was (a) nothing, or (b) I assume Jim "won Harris County" Sharp came across like a champ, as always in his remarks to the group.