A Salute to Veterans

Well that’s what they used to call November 11, anyway. But now we call it Veteran’s Day and that’s OK. November 11th was originally Armistice Day because that is the day that The Great War, as it was called then, came to a conclusion. November 11th 1918.

This is when hostilities ceased on the Western Front. In Europe. The Turks were a little behind on things so they fought for awhile longer before their country, the Ottoman Empire, was segmented into smaller countries, one of them being Iraq.

Armistice Day, or Remembrance Day, is still celebrated as such in many countries of the world, in remembrance of the 20 million who died between the years 1914 and 1918.

But after fighting in a war that saw the deaths of double that number, some US veterans argued that Armistice Day was somewhat passé, since we had learned not to name our world-wide wars, but to number them instead. In 1953 it was proposed to honor all veterans on Armistice Day, and the bill to change the objective of the day was signed into law by President Dwight D. Eisenhower on May 26th 1954. On November 8th of the same year Congress amended the law to change its official name.

So on Veteran’s Day, I wish to honor my forefathers who served their country during the World Wars.

The guy in this first photo is my grandfather. He was the son of a German immigrant (who left his country before they called it Germany) who enlisted in General Pershing’s American Expeditionary Force. 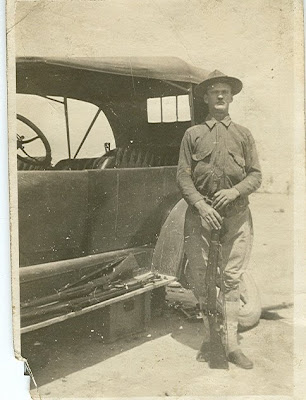 There he is in France.

He’s standing there with a running board full of guns. The auto is the one that he was repairing at the time. 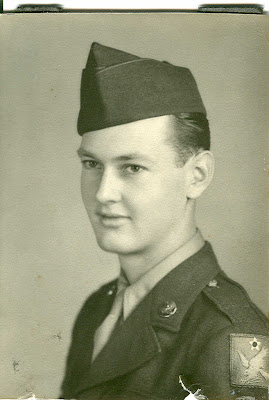 This guy is my father. My father was drafted in 1943. He tried to enlist but he was rejected because of his perforated eardrum. Imagine his surprise and glee when he was drafted into the USAAF so he could repair shot up B-24s in El Paso. 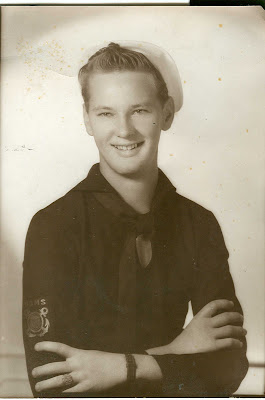 And this guy is my uncle. Sure he looks young. He was 15 when that photo was taken. Too young to fight in the war in the Pacific, he enlisted in the Merchant Marines and sailed from one end of the Pacific Ocean to the other under the gun sights of Japanese submarines, delivering war materiel to combat areas.

They served, but not one of them fired a shot in offense or defense.

But they served, nonetheless.
Posted by Hal at 4:53 PM

Hi Hal,
I liked your vets day tribute. Since we are both of German descent (my grandparents came here in the early 20's from the Vaterland, after my Grandfather served in WWI and got to breathe some of that good old mustard gas) I thought you'd like to read this.

It's an interesting piece by William Fischer, German prof at Portland State, in Sunday's Oregonian on German American Culture.

Oh what wonderful historic photos of your father, uncle and grandfather and what a fitting tribute to them. They would be pleased....

There is quite an obvious family resemblance among all of you!

Don't know what you mean Geri. The old man and the uncle were angelic compared to this grizzled mug. Even at 83 the old man looks better than I did at a third his age. Must be the UV rays and the trans-proteins.