I received a hot tip from the people over at Proud of Who We Are. A website that is dedicated to the “coming out” of politicians who make it their business to bash gays, deny gays the rights that everyone else in the country enjoy, and generally badmouth the whole lot for political points among the dimwits of the extreme rightwing of the Republican Party.
Today they have a story about our governor it seems.
Governor Rick Perry.
Now Rick Perry is down on record as being anti-gay and pro-secession. And maybe the two go hand in hand. A couple of weeks ago, as Perry was stumping up and down the byways of Texas, in Temple, Texas specifically, Rick Perry got up and praised the state that he is supposed to be leading. Praised it in such a way as to feed the homophobic appetites of his followers.
From the Texas Tribune:
Now flash back to April 13, 2009. On that day we find that Rick Perry was attending a “business meeting” at a place in Key West, Florida called the Cabaret at La Te Da. There, Rick Perry, courtesy of his Texans for Rick Perry campaign fund had a fine time as he ran up a tab for $78.26. The people at Proud of Who We Are contacted the folks at La Te Da, a well-known “travel destination for top-flight drag entertainment” (female impersonators for those of us who live in a box) and were told that the entertainment that evening was a very good Cher impersonator.
No one knows whether Governor Perry had a good time or not, but he apparently had a good enough time to split a couple of Lone Stars with his entourage. $78.26 worth.
And yes, his campaign had the good sense to report the expenditure. Here is a screen capture of the Texas Ethics Commission report from the July 2009 filing. 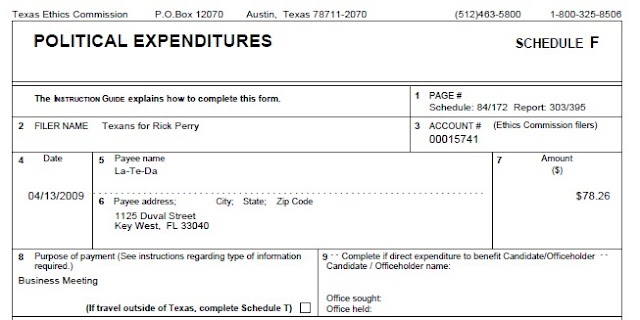 Now I am not one to be judgmental over the sexual orientation of anyone. That’s not something I do, nor do I think it is the purview of any government bureaucracy to do so. That’s just simply bad taste in my opinion.
If Rick Perry likes to watch men perform impressions of famous female songstresses, well that’s up to him. I just think that it is in poor taste not to practice during a “business meeting” what one preaches on the campaign trail.
After all, one man’s Cher is another man’s cherie.

“Social issues might be in the back seat, but they're still in the car: ‘There is still a land of opportunity, friends — it's called Texas. We're creating more jobs than any other state in the nation. ... Would you rather live in a state like this, or in a state where a man can marry a man?’”