Convention of the Dark Side Meets Today In Houston 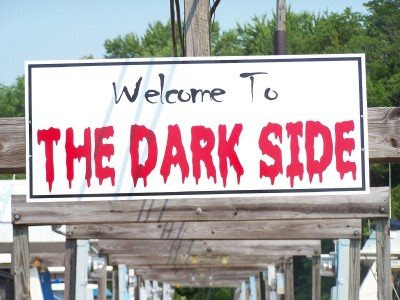 Did you wake up this morning with a stiff neck? I did. Did you jam your big toe into a sofa leg while you were looking to get a cold pack on your neck? I did. Did you then kick your dog into the next county? Not me. The Half Empty Whippet met her maker last year at the ripe old age of 16.

But if she could have been within kicking distance I swear it would have happened.

There is only one explanation for this dark cloud that suddenly appeared over me and the greater Houston area in general: The Republican Party of Texas, aka the party of The Dark Side, is meeting through this weekend in the George R. Brown Convention Center in downtown Houston.

10,000 mean-spirited, women-and –immigrant-hating, bible-thumping, self-righteous, children-eating . . . people, will meet from today onward to discuss how they can get more for themselves and leave the poor, sick and hungry to fend for themselves.

It takes a special kind of person to be a Republican these days. A person capable of listening to outrageous lies and believing them with ferocity. On the list of speakers this week is a real rogue’s gallery: Rick Perry, David Dewhurst and Tom Craddick will be the Amuse-Bouche, Salad and Sorbet on today’s menu, followed on Friday and Saturday by John Cornyn (box turtle soup), Kay Bailey Hutchison (sheep’s brains), Ron Paul (artichoke hearts), Newt Gingrich (fried pork rinds), Mike Huckabee (Rocky Mountain Oysters) and Mitt Romney (Rat Burritos).

So if you have a strong desire, over the next couple of days, to hit a kid, steal from the poor, or sit in an airport men’s room with a wide stance, relax. It’s just the negative energy that we all know hovers around and above members of the Dark Side.

It’s a little thick right now, but this too shall pass.
Posted by Hal at 10:22 AM

"A person capable of listening to outrageous lies and believing them with ferocity."