A few Democrats actually attended Congressman Pete Olson’s Town Hall meeting this afternoon. Held in the cafeteria of a middle school, the room was nearly filled to capacity. It was hot outside, and as time wore on the heat increased inside as well.

Now the meeting didn’t get totally out of hand as you are seeing on TV and You Tube as teabaggers attempt to disrupt the Town Hall meetings of Democratic legislators, This was mainly due to Olson’s attempt to maintain order by suppressing questions and keeping the microphone for his own use only.

Audience questions to Olson were entered on 5 x 7 cards that Olson’s aides collected and then filtered. They literally handed them to him one at a time. So Olson’s questions were largely tailored to Olson much like his ridiculous “polls.”

For example, here is one “poll” question right off of one of his recent glossy mailers: “Do you support or oppose limiting access to health care by placing a government bureaucrat between you and your doctor?”

Things started out pretty calm, as a result. The heat was turned up a little after Olson read the 10th Amendment to the Constitution. Someone asked him to read the Preamble to the Constitution, and Olson complied. I began wondering about this as Olson began with the words “We the people…” until he got to that part that I mentioned in a previous posting: “promote the general welfare.” At that point several people in the room broke out into vigorous and loud applause. [Note to self: can these be my 6 readers?]

Olson paused and looked genuinely surprised, realized at that point that he had been punked, but then continued reading.

It was then that I noticed three young people standing at the back of the room holding up handmade posters. The photo I took was very dark and I brightened it as much as I could. Here they are. 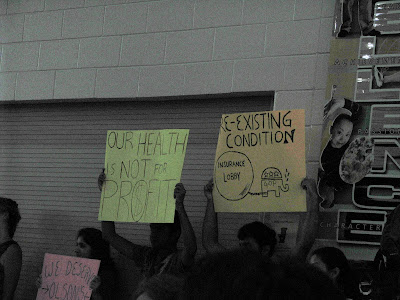 And then one of Olson’s aides handed him a card that had a very innocuous question, and his answer ignited, shall we say, vigorous disagreement.

Now the audience, by my estimation, was mostly of Olson’s party. You could tell by the enthusiasm of his dittoheads. So this mini-rebellion was finally put down by a strong rant on the part of Olson.A rant that included imagery of President Obama “just jumping around.” A rant that clearly signaled the dittoheads in the audience to agree with enthusiasm.

And they complied as if on cue.

And yes, there is video.

I don't understand why President Obama has not mobilized all his supporters to "drown out" the right wing nut jobs? Where are they?

I don't know anon. I think maybe its that a lot of Obama's supporters have gone into hibernation until 2012 and the ones that are left want to try and be nice. The ultra-right, however, is motivated because they smell blood in the water.

Ol' Pete got spanked pretty hard by the progressives at his town halls this past weekend. I'm sure some good video will come out of it.

Going to try to be there in Richmond, all concerned citizens need to attend. It was a love fest in Sugar Land and I expect huge support participants in Richmond. This is a very red county. But I will be very interested in the political ebb and flow when parents come to realize how the state budget has come home to roost.