Austin Texas In Solidarity with Wisconsinites

My friends lead me where I would not myself trod. Austin is a long, long way from where I live, but Move-On.org organized the rally in Austin, Texas' capitol, and my friends, Don and Susan, were going come H-E-Double-Hockey-Sticks or high water, and they offered me a seat in their American-manufactured vehicle.

The rally was in support and in solidarity with the Wisconsin 14, the 14 Wisconsin state senators who have fled their state, their homes and their families so that the hated bill that would strip public sector employees of their right to collective bargaining would not pass. Not pass without a quorum. A quorum that they lack by one lone senator.

The rally was also in solidarity with the public sector union employees, of which I count myself in their number. The cheeseheads that won the 2011 Superbowl are now leading the nation in a rebirth movement to restore the middle class.

I loved it that the union rally followed, and therefore included a rally in support of Planned Parenthood. Pink T-shirts blended with red ones. We were one. We are one and the same in mind, I think. Young women proudly sporting amazingly colored tatoos mingled with we unionist old farts. 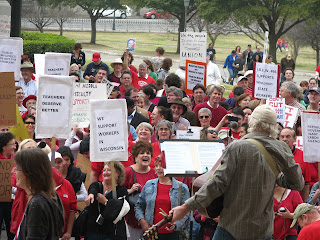 My favorite. Notice the sea of red. This was the entertainment before the speeches. This was taken from the south steps of the Texas capitol building. They played a lot of Woody Guthrie songs. 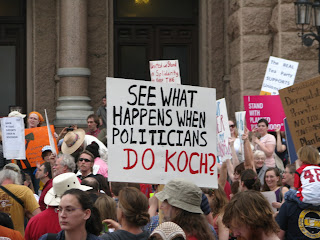 A sign I liked. One thing we all noticed was that not one of these hand-lettered signs had mis-spellings. We progressives, if anything, know how to spell. We even know how to turn a phrase. As one sign read, "If you can read this sign, thank a teacher." 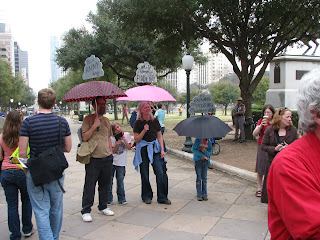 ﻿And this seems to have been a family effort. Husband, wife, daughter all carrying umbrellas, and all bringing up the fact that Texas has a 9 billion dollar "rainy day fund" for when we can't pay our bills . . . like now. The day threatened to rain and these three were the only ones in the crowd to have a pretext to bring umbrellas.
Progressive Texans, I think, have a corner on the market in sheer smart signage.

As opposed to our opposition. 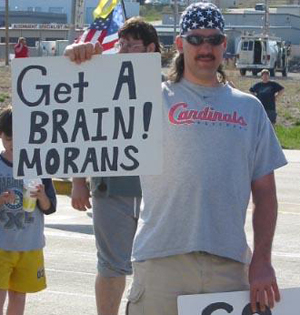 Beast of the Big East said...

According to http://failblog.org/2008/01/30/morans/ , the image of the botched sign (incorrect spelling of "morons") in your post predates the Mess in Madsion by three years.

Sadly, it's probably still poignant today, given that we live in a world where brute anything-but-intellect trumps genuine knowledge.

Which is exactly why I have used this photograph before, to make that very point.