A totally predictable thing occurred in nearby this weekend. For some reason a poster depicting a bunch of guys in cowboy hats and carrying guns posed in front of a hanged man dressed in traditional Iranian clothes has drawn the ire of, I am imagining, local people of Iranian extraction. 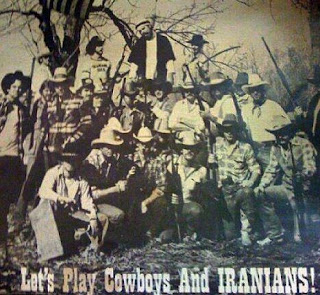 The poster has been hanging in the same restaurant in Katy since the Iranian hostage crisis in 1979.
And yes it is tasteless.
It went up at a time when American outrage against was at an all time high, when the Ayatollah Khomeini was the most hated man in . I remember all of that rather well.
But since that time we have seen that Iranians themselves are chafing under a yoke of oppression, especially when mass protest rallies were brutally put down by government troops and thuglike militias.
So when you see this poster, completely out of context with the reason it was produced in the first place, now that the hostage crisis is a dim memory, yes, it looks like what it is, a really bad racist poster.
So the restaurant drew a small crowd of protesters to make known their displeasure at having the poster still hanging on the restaurant’s wall after all these years.
But this is . Do you think business suffered? Not by a long shot. Yesterday was one of the best days that the restaurant has ever had. People were lined up out the door to buy barbecue.
The owner said “Yesterday was one of the best days we've ever had. I'm pleasantly surprised, yes. I mean I knew we had fans and friends, but this is just golly God.”
Yes, golly God.
. Doing its utter best to prove to the world that it has the reddest rednecks this side of .
Posted by Hal at 11:35 AM

I've never seen anything like this in East Texas and we are not all rednecks here. K.D.F.

I agree about Louie. I have chronicled some of his greatest hits on my blog under Louie's greatest hits and several other labels. Louie's most crazy comments might have been a better label but that is how I started labeling them.