Farhan Shamsi for JP. He Is Just the Best Person for the Job 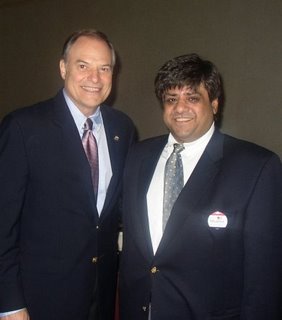 Democratic or Republican, it doesn’t really matter. That’s what some people can’t see. The county wide offices that are being contested in Fort Bend County, Texas, are really more about competency than party affiliation.

You generally don’t see a party affiliation on Farhan Shamsi’s campaign signs or campaign literature. He’s on the Democratic ticket, but really, that’s almost a non-issue with this very apolitical office. In other states, like the one I hail from, Justice of the Peace is a non-partisan office.

Farhan’s opponent, Italian-American Ken Cannata, has “Republican for Justice of the Peace” written across the bottom of his campaign posters. A friend of mine mentioned today that putting that on your signs might actually be a liability these days. I thought so, too. As a matter of fact, I wondered about this when I saw his sign planted right next to a “Had Enough? Vote Democratic” sign. Certainly Martha Wong a Republican state house incumbent, is having issues with putting Republican on her signage.

So it’s kind of comedic, really. People vote for candidates who run for what is in fact a non-partisan office, based on the candidate's party affiliation. This is ironic in that this year that could work against Republicans.

Farhan’s qualifications? Well look, the JP is probably the first stop along the long road to perdition for troubled youth. The JP is essentially their first point of contact with the system that will welcome them to a lifelong affiliation unless someone is there to provide “tough love”.

Want to lose people to a life of crime? Put someone in as JP who has no experience with troubled youth. Someone like Ken Cannata. Cannata professes that his experience as a lawyer will allow him to “transition” to JP with no learning curve. Oh, yeah. I’m sure he knows his law, but does he know teen culture? Farhan does. I could cut and paste it all here but Farhan has written it up on his campaign website. Go take a look.

Those who simply don't understand the issues will vote for Ken Cannata to the office. Do this, and all you do is put an inflexible conservative white man in office. One who does not nor cannot understand the people that come to him.

Farhan is running for Precinct 3 Justice of the Peace. That precinct, covering almost all of northern Fort Bend County, overlaps with two congressional districts. CD-22 where Nick Lampson is running for United States Congress against a Libertarian and 3 write-in candidates, and CD-14 where Shane Sklar is running a credible race against Libertarian in Republican clothing Dr. Ron Paul (Dr.? Yes, he’s a gynecologist). This weekend, Farhan will be block walking with Shane Sklar’s organization in the Katy area. Want to help send Shane Sklar to congress? Want to help put Farhan Shamsi onto the JP bench? Let’s all go to Katy this Saturday. Click on the Fort Bend Democrats logo. After their "Candidate Appreciation Brunch" a block walk is being organized. Come. It'll be fun.

Great post! I'll see everyone Saturday at the big block walk for Shane and Farhan.

Try and make the date. Lots of stuff going on that day, but if you are still trying to gel plans for Saturday, don't miss the Katy event . . . unless you want to incur the muse wrath. I have it on good information that muse does not forget.