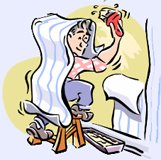 Accomplishments like conducting a successful fundraiser at our Combined Campaign Headquarters at 4800 Avenue H, Rosenberg Texas. Vince, Bev, Geri and Marsha did a great job and we pulled in a pile of cash.

Accomplishments like manning a booth at the Fort Bend County Fair. Another three of us were there yesterday, and more helped out throughout the past week. We had a very successful day. This booth had an effect on people. We had literature, lawn signs, and campaign buttons for any and all who wanted one. True story: last Sunday I was block walking for Neeta Sane, Democratic Party candidate for County Treasurer. A small child opened her door to Laurel and I, and she spotted the campaign paraphernalia that I had festooned on my “campaign vest”. “Mommy,” she called back into the house, “There’s a man at the door from the fair.”

Accomplishments like organizing for, and printing tickets for, a future fundraiser that the Fort Bend Democrats will be hosting in Quail Valley. That also happened on Saturday at the headquarters.

Accomplishments like entering data on the Texas Voter Activation Network, the not-so-secret weapon of the Texas Democratic Party. Daily at the HQ but also from our home computers. Yes, we get lists.

Accomplishments like co-hosting, with the Katy Area New Democratic Organization (KANDO), a Candidate Appreciation Brunch at the Cinco Ranch Branch of the Fort Bend County Library this Saturday. All of the county-wide candidates were there: Albert Hollan, Rudy Velasquez, Neeta Sane, and Veronica Torres. A representative from the Bell campaign was there (Chris was resting after his debate in Dallas). But in the end, Nick Lampson was there to fire up THAT very active Democratic Club.

Accomplishments like putting out more and more of the campaign signs that dot the landscape in Fort Bend County. We had a team out doing that.

Accomplishments like organizing and conducting a block walk from the Cinco Ranch residence of Farhan Shamsi, Democratic candidate for Precinct 3 Justice of the Peace. We walked the neighborhoods to raise public awareness of the county races as well as that of Shane Sklar, Democratic candidate for Congress, whose CD-14 district overlaps with Farhan’s 3rd Precinct in the Katy area. It went well. Farhan reports that a wide area was targeted and many voters’ doors were knocked on. I myself covered an entire subdivision across from Farhan’s. Veronica Torres, candidate for District Clerk, covered Farhan’s subdivision. That’s what Fort Bend Democratic candidates do. They cover each other’s core areas. That’s teamwork.

I was upset though. muse, who is, another active Fort Bend Democrats club member, was supposed to show up at Farhan’s and didn’t. Knowing muse,there is always a good reason for that. And don’t you know it, this one beats all. muse couldn’t make the block walk because of a call from a KHOU news reporter that morning. Lee McGuire at KHOU was going to air a story on some FEC campaign fund reporting irregularities that muse has been blogging about in regard to John Davis’ HD-129 campaign funds. muse couldn’t come because McGuire needed some help with some misconceptions and errors that he had. The story aired at 6 on Saturday and again at 10.

Life was good on Saturday. It’s always good when you and your fellow Democrats put out the effort that is needed and will be needed in the immediate future, to bring honesty, integrity and transparency back to Fort Bend County, and surrounding areas. We work hard, and we play hard. We laugh together and we get on our high horses together. And we get things DONE together.

Jeez, this would be so much work if it wasn’t just so much fun.
Posted by Hal at 5:48 PM

Let's see. And there was also the house party on Sunday in Fort Bend for Lampson and the four Democrats running for county offices. And, Farhan Shamsi had a fundraiser Sunday night.

There's probably even more that we are missing!

We do good work. Because we have Had Enough!