Who Supports “The Public Option?”

If you are listening to what Maine’s senator, Olympia Snowe, is saying, not one Republican in congress supports “The Public Option,” which, as I now understand it, is a government-run healthcare insurance system like Medicare, but available to only a small fraction of the American public – something around 5% of us.

Here is what she said on Face the Nation this weekend:

A public option in the health care bill is "universally opposed by all Republicans in the Senate" and it is "a roadblock to building the kind of consensus that we need to move forward," [T]herefore, there's no way to pass a plan that includes the public option.”

I guess that is what you can call the Republican plan for Universal Healthcare. Universal opposition to it.

OK, fine. What are American now saying about “The Public Option” now that Barack Obama has explained some of the plan to us, to congress, and to an assembly of 50,000 Minnesotans this past weekend?

How about the Washington Post’s poll, released this morning as a benchmark for how the public is weighing in on “The Public Option?”

You have to scroll down, and you have to look at direct questions because apparently Americans are affected by all of the nuances of a loaded question like “Would you say Obama is doing a better job as president than you expected, a worse job, or what? Is that much better/worse or somewhat better/worse?” I am, also. I would have a difficult problem coming up with a definitive answer to that question because, frankly, I want Barack Obama to do more, and to put more pressure on the middle to do the right thing for all Americans.

Here is the question I think homes in on the issue. It is a direct question that is not subject to nuance:

How about that? Since the Townhall Angst of August, public support for “The Public Option” has risen from 52% in favor to 55% in favor. The poll has a + 0.5% error.

Not only that, those who are opposed to “The Public Option” has shrunk from 46% against in August to 42% against after Obama’s speech to the joint session of congress.

And this is a poll of everyone. If you look at the “flash poll” of those Americans who viewed Obama’s speech last Wednesday, the favorable number climbs to 67%:

“Two out of three [67% of] Americans who watched President Barack Obama's health care reform speech Wednesday night favor his health care plans — a 14-point gain among speech-watchers, according to a CNN/Opinion Research Corporation national poll of people who tuned into Obama's address Wednesday night to a joint session of Congress.”

Going into the speech, a bare majority of his audience — 53 percent — favored his proposals. Immediately after the speech, that figure rose to 67 percent

The tide is turning.

But wait, there is more.

Nate Silver, the master statistician who gave us a dead on accurate electoral college call in 2008 says that over half, or 51% of congressional districts currently being represented by so-called “Blue Dog Democrats” who are now balking at “The Public Option,” 51% of these districts have a majority of voters who actually support having a public option in the healthcare package.

And there’s even more.

What about a poll of the people who don’t have as many problems dealing with all of these ideas because they make it their living dealing with them on a daily basis. 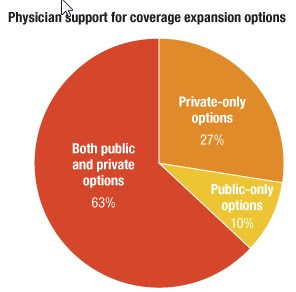 Sixty-three percent of all doctors polled indicate that they favor some sort of mixture of public option and private insurance. Interestingly enough, 10% of all doctors favor Single-Payer Universal Health Care. So these two groups together comprise nearly ¾ of physicians who are now providing healthcare to Americans.

Only 27% favor a private insurance only system, that is, favor retaining the status quo.

This puts congressional Republicans, and some fiscally conservative Democrats, at variance with not only what professional healthcare providers desire, but also with what a majority (at 55%) of Americans want.

This isn’t a really hard decision. Olympia Snowe will have to face a Democratic opponent in 2010 and I think it is safe to say she will be sent home after voters have their say.

Unless, of course, Snowe, and a few others who are bucking the trends in their own states and districts, see reason.

Or absent reason, perhaps they should exercise their own selfish interests and bow to the majority so they can be retained (maybe) next year.

The difference is within the margin of error, making it no difference at all if one wants to represent the results in an intellectually honest fashion.

Check your math, Anon. The last time 0.5% came withing shouting distance of 5% we re-elected a president who knowingly lied to the country about Sadam Hussein and WMD.

It amazes me that President Obama and his team have allowed themselves to lose the "battle of the messages."

Instead of getting their out their message and plans on health care reform (which obviously has the support of the American people), they are constantly responding to things like loser Joe Wilson, commenting off the record on the MTV Music Awards, taking pictures of Air Force One over NYC, worrying about ACORN, etc.

What has happened to President Obama's "message team" from the campaign. We need them back.