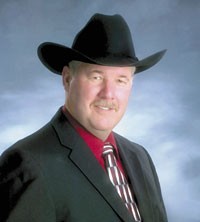 I had an interesting experience in true “Grassroots” campaigns yesterday, where the grass, in this case, came up to my hip in some places. And then there were the thorns, and the freshly moistened cow pies (it rained possums and armadillos that morning). Again, I joined Don and Charles, and this time with Tony, to put up campaign signs in the Fort Bend County portion of CD-22. Last time I helped install signs in the city-proper areas of Richmond and Rosenberg. This time we hit the highway and went out to the agrarian areas of Fort Bend County. It turned out to be a nice country excursion for this city slicker.

David Van Os said it best: Rural Texas is overlooked by modern political campaigns. There is a tendency to blitz the central media markets and ignore the rural areas where it is more difficult and costly to deliver any kind of message. In response to that, we spent the day bringing the campaign to rural parts of Fort Bend CD-22. Needville and Pleak Village are now adorned with the Democratic Party’s Fort Bend candidate team, and Nick, too. We also posted signs for Deborah Bottos, running for state house in District 28 prominently with her campaign colleagues.

But this posting isn’t about installing campaign signs, or Deborah Bottos, for now at least. It’s about Hank Gilbert who is the Democratic candidate for Texas Commissioner of Agriculture.

Hank Gilbert is a former high school agriculture teacher. His background is all about cattle ranching and agriculture. It is his passion.

Hank has held many positions in the agricultural community, both in 4-H and FFA, but also as a director of the Texas Simmental/Simbrah Association. Most recently he was President of Walnut Grove Water Supply, a member-owned cooperative where he was able to cut operational expenses and reduce the member’s water rates by 35%. He has never served in public office.

Why run? What possesses the man to run for Ag Commissioner? As Hank tells it, it’s because he became disgusted when he read that yet another Republican political hack was going to use the office to rise in the state hierarchy. Current commissioner, Susan Combs, is using the office to step up to State Comptroller this year. Before Combs? Rick Perry. Before Rick Perry? Democratic Commissioner Jim Hightower - the last Agriculture Commissioner to work for Texans and not for their own self-promotion.

Who is Hank Gilbert running against? State Senator Todd Staples. You’ll see why as you read on.

Hank Gilbert is an opponent of Trans Texas Corridor. He says that it will hurt the marketing of Texas agricultural products, as a direct route from Mexico to Canada will essentially bypass Texas. The massive project will also serve to remove hundreds of thousands of agricultural acres from cultivation. Democrats, Independents and even some Republicans are opposed to the TTC. No one wants it. It is Governor Perry’s Iraq. Yet not only is Todd Staples in favor of the TTC, his campaign coffers have been stuffed by Cintra-Zachry, the corporation that stands much to gain if the TTC project goes forward. As a matter of fact, Staples co-wrote SB 1706, which enabled the TTC. Nice job, Todd. Always protecting the Texas Agriculture Industry, huh?

Of the TTC, Hank Gilbert has said that it will result in

“taking the vegetable industry away from Texas. By building this corridor from here to Canada, we will effectively take the U.S. out of the fruit and vegetable market. We will seriously deteriorate the beef cattle industry in this country because of the influx of foreign products across this border.”

“This is the one single largest thing that is going to affect and begin to destroy Texas agriculture,” Gilbert said. “And this is just one road. There are over 4,000 miles of these toll road plans taking up over 600,000 acres of farmland.”

While the Agriculture Commissioner is responsible for enforcing of all areas of Texas regulations concerning food inspection, pest control, things you would expect, things that are only in the background to we city folk, the office also oversees the department of weights and measures. This is a hot button for we commuters. Are you sure that you are getting what you are paying through the nose for? Are you aware that under Jim Hightower, gasoline pumps were checked annually for accuracy, but since Republicans have taken over the office, gas pump inspections are now required only once every 4 years? And some of these inspections are overdue?

Why vote for a Democratic Ag Commissioner? You can bet that most gas pumps are out of calibration, and you know if there’s a mistake in how much gas you are actually paying for, the mistake won’t be in your favor. Remember, Republicans don't care about your gasoline bill.

You know that, don’t you?

Hank Gilbert says his office will see to it that inspections will be back to an annual basis. What has Todd Staples said about this? Nothing. Nada. Staples is part of the Republican machine of power and political hackery. Everything to stay in office or advance, nothing for the people. Why, Todd would ask, should he do anything for the people? What have the people done for him, Todd Staples?

I have heard confirmation that Hank Gilbert will be present at the Fort Bend Democrats "True Blue Fort Bend" Labor Day Barbecue at Sugar Land Community on Sunday September 3rd. A wide range of statewide, local and federal candidates will be there. Go. Just go. Tickets are limited. $20 advance, $25 at the door. Click here to start the ticketing process. One thing I need to ask him. You see a whole bunch of campaign literature and banners with Red White and Blue, colors, but never the green and yellow colors that Gilbert chose for his campaign. I wonder why?

Finally (you knew this was coming) TexRoots is supporting Hank Gilbert for Agriculture Commissioner. Go here and drop a few bucks in the kitty for Hank. Shane Sklar and Juan Garcia can also use some help.
Posted by Hal at 6:42 PM