Aw come on, you can’t have circumstances like these in the Texas State Comptroller race, and surnames like these, and not come up with a few ironies. This is the cleanest one I could come up with. Anyone else who has an idea can post them in the moderated comments.

Fred Head and Susan Combs are the Democratic and Republican candidates, respectively, for State Comptroller. Usually I am able to insert links to campaign websites, but oddly enough only the monied candidate has a campaign website up. Here is what I could find for Fred Head, a bio posted on Texas Kaos and a transcript of his convention speech on the Austin American-Statesman website. Here is Susan’s site. Here is her “Unofficial Site”.

Fred Head is a veteran Democrat, a former representative in the Texas state house, and one of the bipartisan “dirty thirty” group who, in the ‘70’s worked to pass landmark reform legislation that we all take for granted today (one of which, the now infamous Section 143 that was used by Tina Benkiser to rule Tom DeLay ineligible). Head is still a populist, still a reformer, and is now running on the steamroller that is gaining momentum to retake the state legislature and every other office held by a Republican. At the state convention Fred said:

“On all of the issues, [Republicans] tell the public what they want the public to hear because they think it’s popular and then they go and do what helps the special interests, the influence peddlers, and their big money friends. And that’s why we’ve got to prevail…to change the situation in Austin."

And he also said this:

“Now, I believe it’s unprecedented, ladies and gentlemen, to have a candidate for a state wide office in the state of Texas who has written and sold a trashy romance novel that glorifies premarital sex and arouses sexual desires.”

And then he held up the paperback to show the delegates. It’s called “A Perfect Match”. For those of you who wonder how deeply she penetrates into the sex stuff, you can’t easily pick up a copy because it is out of print and the publishing house has folded. I couldn’t even find a used copy on Amazon.com. But here is a synopsis of some of the more titillating passages that don’t exactly go as far as, say, Jean Auel's did in her Earth’s Children series (I own all 5 of them). 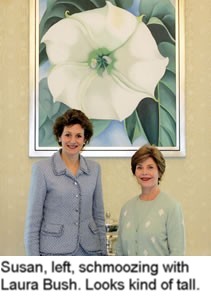 I have a theory on why Susan chose to write the novel. As Fred says, she wrote it when she was in her mid-40’s. That sets off alarm bells in me. It’s an age when women (and men) are beset by mid-life crisis, but also when women, as Professor Kinsey found, are at their sexual peak. Here they are at their peak, and they look at themselves in the mirror and wonder if they are still desirable. So I think this was Susan’s outlet. It could have been worse. She could have run off to live with a bearded 25-year old living on an Oregon commune.

So I can understand why Susan wrote what she wrote. Seriously.

But Reggie Bashur, Combs’ spokesman dismissed Head’s comments as ". . . a non-issue, The comptroller's office is serious, a lot of weighty issues, and it's strange that Mr. Head would pick this as his issue to discuss."

Fred Head says that Susan Combs is a hypocrite because she wrote the sex book, but also supported SB1 way back when. SB1 was “the re-write of the state education code that promote[ed] abstinence. The amendment, by Rep. Warren Chisum (D-Pampa), [said] that any course on human sexuality must devote ‘substantially more attention to abstinence from sexual activity than to any other behavior’ and ‘emphasize that abstinence from sexual activity is the only method that is 100 percent effective in preventing pregnancy [and] sexually transmitted diseases.’)”

Well, yeah, there’s something to that. You can’t be writing a sex book one year, and then later on advocate emphasis on sexual abstinence in sex education books, can you?

But then there's that Sexual Peak/Midlife Crisis thing . . .

And let that be that. God knows she’ll have the middle-age female vote all locked up.

And then they can all step back on solid ground and discuss the issues, of which there are many.

And one other thing. We Democrats here in Fort Bend County have a County Commissioner, Andy Meyers, who is single-handedly putting out trashy 4 X 8 signs that are very inflammatory to minorities, chiefly Hispanics and South Asians. See Mark's blog for photos of them, then go to the Fort Bend Democrats website and support us in our efforts to fight off this neocon racist attempt to intimidate voters with the politics of hate and fear.
Posted by Hal at 11:12 AM

Susan Combs wrote a book with sex and then Susan Combs took a public position during debate on a sex education (ABSENCE ONLY) bill while she served as a State Representative. The point, Susan Combs is a hypocrite.

Please debate how you can write a book of this nature and then took a public position of sex education (ABSENCE ONLY) bill. Can't have it both ways.

Wow, Anon really made the rounds last night, lol. Out of curiosity, I looked it up. :)

I already stated my response to her/his debate request on my blog. BTW, someone tracked where the comments were coming from, lol.

The short of it is, Teaching kids to abstain (not absence, lol) is not the same as books for adults. They are clearly two different issues and this is a weak, see through attempt at political campaigning--notice where all the links from Anon go to. They really should hit facts, not candidate election websites.

"Absence" is the lack of being there.

"Abstinence" is the lack of acting while being there.

(I hate this. Anon, or Fred, or whomever you are, get the difference.

Advice from the field: People want sex. People like sex. Don't tell people that they should not have sex. You are just going to piss them off.

Fred: what is Susan Combs' position on education?

What does she think about our president's war in Iraq?

In your opponent's mind, how important is energy independence and what is she going to do about it?

Dwelling on whether she is or is not a hypocrite because she wrote a marginally titillating romance novel is not the way to go.