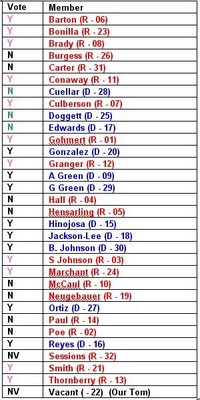 The vote over raising the federal minimum wage from $5.15 to $7.25 over a 3 year period passed, but only after Republicans added a provision to drastically cut inheritance taxes – a move that only benefits the super-rich (unless you are Warren Buffet, and it doesn’t matter since he gave all his wealth to Bill Gates).

The Purple vote is a no-brainer. Nationwide, Republicans voted overwhelmingly in favor of the bill, 196 for to 21 against. Compare that to the Texas delegation’s Republican vote: 11 for to 8 against. More than a third of the total Republican votes against the bill were cast by Texas Republicans. Very, very angry white men.

The majority of Republicans, you see, were voting a win-win-win scenario: By voting for it, it looks like they are doing something that they normally would never do: vote to give impoverished constituents a raise in pay (and maybe, in so doing, obtain their vote). The inheritance tax reduction part of the bill is very much something Republicans have wanted to give the super rich - some say $732 billion in tax breaks. In return, Republicans would hope, part of the tax savings will go toward campaign contributions. More to the point, though, the estate tax provision was a poison pill. It negates all of the good, as pointed out by Harold Meyerson of the Washington Post:

“The shortfall could well lead to offsetting cuts in programs that benefit the same working poor that the minimum-wage increase would help”.

The amendment will guarantee killing the bill in the Senate, where democrats have vowed to vote against it. Another feather in the Republican cap: they can point fingers at democrats and say that they voted against raising the minimum wage in an election year.

Also not reflecting state totals, where Ayes outdid Nays by 8 to 3, nationally, Democrats overwhelmingly voted against the bill by 34 for to 158 against. Reps Cuellar, Doggett and Edwards voted with the majority of their fellow democrats. The eight Texas Democratic Aye votes are attributable to the fact that these are votes from districts with high poverty levels, and their votes were cast in the interests of their constituents.

This vote is an excellent example of how and when this Republican majority “do-nothing” congress does something. Meyerson writes further:

“Their tone was best captured by Tennessee Rep. Zach Wamp, a Mayberry Machiavelli if ever there was one, who could not restrain himself from telling House Democrats, ‘You have seen us really outfox you on this issue tonight.’

"Wamp's taunt can serve as the credo for this entire Republican Congress, which legislates only when, and because, it can outfox the Democrats”

But I think that the Republicans are in for a surprise this year. All these machinations are just going to further alienate voters who are already showing signs of disaffection with this increasingly radical right-wing dominated party.

Why do I have this uncharacteristic optimism?

As if the inheritance tax addition wasn't enough, another thing that they added to the bill was a charge against tips. In seven states where the minimum wage is higher than the federal limit, workers who receive tips (you know, those waitress fat cats) are allowed to collect the tips over and above their minimum set wage. A provision added by Republicans actually reduces minimum wage in those states, as they say the tips are included in their total wage. Barbara Boxer, D-Calif said this:

"Only this Republican Congress could figure out how to turn a minimum wage increase into a pay cut for hundreds of thousands of Americans, including thousands of Californians”

Senator Boxer, said she is planning amendments to the proposed bill.

So the issue will remain in public view for quite awhile, and the true intent of Republicans in the House and Senate will become very apparent. Why? They can’t let the minimum wage bill pass. 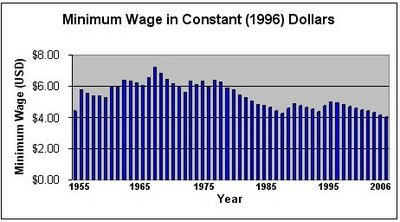 Historically Republicans have hardly had a president in power where a minimum wage increase was passed. Look at the graphic I post on the right. It shows the minimum wage, in 1996 constant dollars. Almost every upward trend took place during a democratic presidency or a democratic majority.

Republicans, you see, will never allow a minimum wage increase bill to land on Bush’s desk. They can’t. He would veto it, and you don’t veto a bill like that during an election year.
Posted by Hal at 3:26 PM

That's some great analysis of the minimum wage bill and the surrounding issues. Thanks.