How Irregular - An Anointment in a Baptist Church 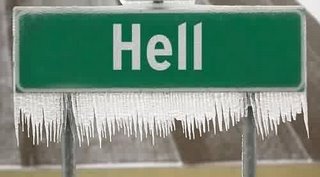 It was rumored this weekend that Republican precinct chairs would be called to a meeting in a “central location” to select a single unified (but not officially Republican) write-in candidate . Well, an hour ago, FortBendNow broke the news that it will indeed happen.


Who: Republican CD-22 Precinct Chairs from Brazoria, Fort Bend, Galveston and Harris Counties, RPT Executive Committee members within CD-22, maybe other Texas state GOP officials, Republican elected officials from the four counties within CD-22, and the original cast of Jonathan Larson's "Rent".
What: Perform a miracle on the order of the loaves and fishes.
When: 7:30 PM, Thursday, August 16, 2006.
Where: First Baptist Church of Pearland (I guess that’s in Pearland).
Why: Nobody knows for sure . . . just can’t give the seat to Lampson without a fight.
How: Everyone brings food (thank God Talton’s out, no cookies), straw votes are cast into one of those Post Office plastic bins, votes immediately counted, and then all hell breaks loose.

It’s not an official party function, they say, because that would be a violation of Judge Sparks’ order, wouldn’t it? Nevertheless, the public is not invited, nor is the press. Another exhibition of the opacity of Republican politics in action? Really I just don’t think they want to show the amount of blood and gore that is going to be thrown around inside that House of God on Thursday. From the photo, I'd say leave your stones at home.

And when will the CD-22 Republicans choose their Savior? Well the picture at the top gives you some indication of my opinion.

And David Wallace: if you plan on attending, bring Kevlar.
Posted by Hal at 6:36 PM

Hal, Babe, you're having too much fun. Tonight I saw a grown man with a real PhD bang his head on the table laughing over the GOP antics.

I don't mind the meeting being in a church. Lord knows these people need the Lord's good influence on their behavior. What I mind is that it's a "secret" meeting at the Lord's House. Locked doors at Jesus's house. Shame on them. If Jesus comes, He'll have to wait outside.