2006: The Year the Republican Party Imploded 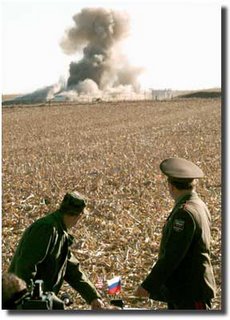 That’s the only way I can describe it. Republicans are imploding this year. Did they all just take a good look at Texas CD-22 and Tom DeLay, and decide what’s good enough for “The Hammer” is good enough for them?

There have been, really, too many Republican implosions to enumerate this year. I think I just want to elaborate on just a few of them - any more and I might sink into a dark depression.

Where shall I begin? Why not Tom? He imploded. He sat there in Judge Sparks' courtroom and said that he didn’t know where he was going to be on Election Day. As I understand it, if he said that he planned on watching the election returns at his Virginia condo, the decision could well have gone the other way.

Senator George Allen’s macaca speech. We all heard it. We all know what he was saying to this Indian-American young man. But Allen didn’t implode there and then, although the charge was laid. He imploded when he tried to explain it all away, and badly. Racists have trouble just hiding it sometimes.

John Davis’ (R-HD-129) campaign finance records. Here he goes along for six long years blithely forgetting just what he spent $100,000 in campaign funds on, and all of a sudden has a FEC complaint lodged against him just weeks before the election. Implosion: "I made a mistake, and we'll get it corrected. It's incumbent on me to know what the rules are." I just love that explanation. A mistake. I should know what the rules are. It reminds me of my favorite Lily Tomlin “Laugh-In” routine: “Nobody told me not to mow the carpet”.

Even here in Fort Bend County, we have a sweetheart deal between Republican District Judge Vacek, his law partner, and the commissioner’s court, wherein the judge and his partner own a house together. They lease it to the county as temporary quarters for the Gus George Law Enforcement Academy for three years at a whopping $160,060, over 50,000 more than the house’s assessed value. Nobody ever finds out about this stuff, so it’s OK right? Right, except this is an election year and their fellow Republicans are trying to win county seats. There is no way this is NOT going to become news.

Mark Foley. Taking a page out of history, Mark Foley at least didn’t deepen the pile that was coming his way by trying to deny it. But oh . . . my . . . goodness . . . Krishna, what this does to the party of family values.

And all the Foley fallout. Fun. Dennis Hastert has an amazing implosive ability. What is his first move when he finds out that Foley’s emails have been leaked ? He wanted to call an investigation into who leaked the report. And THEN backpeddled himself right into a corner, saying that he was only becoming aware of the emails. Only to have people jump out of the woodwork with all sorts of stories about how they told him about Foley’s predilection for inappropriate exchanges with congressional pages months before, years belfore.

You have to wonder, though. This was an affair that seems to be fairly rare. How many gay Republican pederasts do we have, anyway? Just the one from what I can see. What I see, when I look at the fresh young faces of the house pages, is not just teenaged boys, but teenaged girls. So I have to wonder, is this all of it or is this just the obvious tip of the proverbial iceberg?

Awaiting the next implosion with some degree of pessimism – and a shudder on hold.
Posted by Hal at 6:27 PM