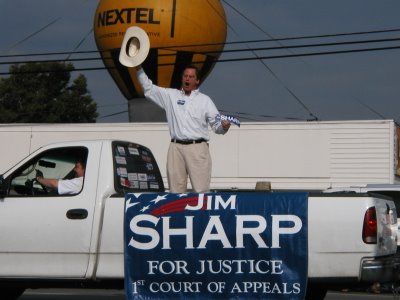 I mentioned that I saw Jim Sharp at the Candidate’s Forum last Sunday. We talked a few minutes and the conversation got around to blogging about the candidates campaigns. I’ve done that for several local candidates, and have actually promised myself to get to all of them before early voting starts. So this conversation reminded me that I still have some work to do and time is short.

So why not start with Jim Sharp? 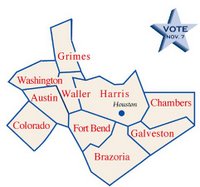 Jim Sharp is the Democratic candidate running for Justice of Texas’ First Court of Appeals. In all there are 80 Justices spread out over 14 jurisdictions in Texas. All jurisdictions have more than one judge, the numbers range from 3 to 13. There are 9 justices in the 1st Court of Appeals whose jurisdiction runs over 10 counties that includes Fort Bend County. This year, 5 of the 9 current Justices are up for re-election, all of them Republican Jim. Sharp is running for Place 9 against incumbent Republican Justice Elsa Alcala.

By my count, of the 80 justice positions in the Appeals Court, only 14 of the positions are filled by Democrats. That’s an incredible statistic. It gives one pause, and a new appreciation to the line that Jim quoted from a speech by James Madison:


“Any same-hands group or faction having effective control of all government is the very definition of tyranny”.

Jim Sharp is qualified. He has his own law firm that he’s run for 17 years – a solo practice. Jim has been involved in Democratic party politics for years since he was in school. He has worked on numerous campaigns in many positions. The one thing that Jim has in common with his opponent, Elsa Alcala is that Elsa has never won a race outright either.

It’s true. Look it up. She was appointed to 338th District Court by then-Governor Dubya in 1998. And she was appointed to her present position in 2002 by now-Governor Rick “Helmet Hair” Perry. OK, OK, she won re-election to the 338th, but that’s what happens when you are an incumbent Republican judge who has not been outted as gay or some such thing. No brainer – you get re-elected.

In 2010 Jim Sharp has played it fast and loose with his fellow Democrats. Calling Linda Chavez-Thompson:

"They vote. Our people don't vote. The Valley don't vote," Sharp said, adding, "We'll see if this big scheme they got of putting Linda Chavez-Thompson on the ballot as lieutenant governor ... works out or not."

Ah God. Sharp being not so sharp.

I hope I am wrong but I suspect that Jim Sharp just made a big poo-poo on his otherwise successful campaign.
Posted by Hal at 6:42 PM