You’re not going to believe this. I was invited to attend a $125 per plate Harris County Democratic Party fundraiser, the Johnson-Rayburn Dinner. I felt really honored.

I also know that I am expected to write it all up.

So when I checked in and got my name tag, I saw that there were lots of JW Marriott pens in a basket so I selected one for later.

muse was there and had the muse thing-a-ma-jig that gets constant use. I had my JW Marriott pen and a bunch of envelopes to write on thanks to Ann, Marsha, and Geri, who provided them to me.

We were welcomed by Houston Mayor Bill White, or should I say Democratic Mayor Bill White. He spoke of victims of Hurricane Katrina that are now going to make Houston their permanent home, and he welcomed them. Never once did he mention directly the statements of Richard “Kinky” (Big Dick) Friedman who wanted them all to go back where they came from. He didn’t have to. And he spoke of a fallen HPD Police Officer, Rodney Johnson, killed in the line of duty. Bill White is all class. Watch as he takes on a statewide office someday soon. 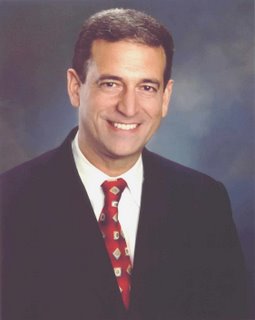 Although we were in the heart of southeast Texas, the keynote speaker was Senator Russ Feingold of Wisconsin. He was introduced by Sue Lovell, who was elected to an at-large position on the Houston City Council last year. I couldn’t figure out why she was wearing an RCMP coat, but maybe muse knows.

Senator Russ Feingold got a standing ovation before he even said one word. There were two reasons for this and everyone in the room knew them. His vote to go to war in Iraq was No. His vote to pass the USA Patriot act was No. Feingold was willing to stand up to Bush/Cheney/Rumsfeld when precious few others were not. He was my hero early on after 9/11. I also didn’t think they had enough to go to war, and knew that going to Iraq wasn’t going to do anything for their War on Terror. That Feingold was so stupendously vindicated by later revelations makes him a very popular speaker these days.

And, by the way, Feingold is known to be considering a run at the presidency in ’08.

He started out by imagining what it’s going to be like when they all go back to the Congress and Senate next year, and there is a new majority. Where will they start? Among other things, their first direction will be to make health insurance available to all Americans, that it is long overdue. He spoke of the Big Pharma-sponsored prescription drug plan, getting that fixed. He said that he originally voted No on Bush’s NCLB but they would also fix that so it would work, instead of being a burden that we all have to bear.

“Things went wrong when we went to war,” he said. And while he labeled the acts of George Bush as nothing but “high crimes and misdemeanors”, he called for the House and Senate to censure Bush for violating the laws of the land. I think he’s correct. Except in some cases that we all know and hate such as his circumvention of FISA, Bush has gotten congress to support his programs of repression through his very effective fear tactics. Fear tactics that now fall on deaf ears.

The voted out the Magna Carta.

It’s all here and that is sublinked from here. Feingold bemoaned the fact that the Congress and Senate passed a compromise bill that invalidates ideas of justice that go back 800 years. The bill effectively nullifies America’s signature on the Geneva Accords, and all of the principles that ruled the Nurenburg Trials.

Bush’s fear mongering again. This time to give Republicans ammunition to shoot at their Nay-voting colleagues across the aisle in November.

I tell you what else it will do. It will cause Freedom Loving Americans of all stripes to get rid of these totalitarian-leaning rascals.

Feingold got one last ovation when he said that this election was not about taking back the country for the next 2 years, or 4 or 8, but for the next 10 to 20, in which we could bring realchange to our country.

Then we were addressed by a former jailbird.

In this case the prison uniform she wore was a badge of honor.

Susan McDougal introduced the congressional candidates. Susan McDougal, you will remember, is the woman who refused to answer questions in the famous Ken Starr Whitewater investigation that resulted in . . . resulted in . . . revelation of an affair between Bill Clinton and a slightly pudgy 22-year old intern. Susan McDougal did time for being on the wrong side of a Republican-led witch hunt after they regained the majority in 1994. A political prisoner, if you will. Same as Martin Luther King. Same as Nelson Mandela, as Rep. Al Green later pointed out.

Susan announced the local democratic congressional and senatorial candidates. All of them were there but Nick and Ted Ankrum. Ankrum was campaigning in Travis County. Nick was off upstate beating the bushes for money.

Then the democratic candidates for state house and senate were announced. Both Sherrie Matula and Dora Olivo were introduced on stage. Sherrie faces an uphill battle against an apparently incredibly dense, but well-funded John Davis in HD-129. muse is after Davis and is tracing his dubious FEC filings.

Chris Bell announced that he had a toothache, and that he was given some medication for pain by his dentist, that it wasn’t working very well, but had been told that it was making him act “loopy”.

He treated us to his jokes. He described a function that they attended where there was an actual donkey in a corral. He said that every time he spoke the donkey would bray. But he didn’t use the word bray, he actually imitated a donkey’s bray, much to the surprise of just about everyone. “That’s my impression of a donkey when I’m acting loopy,“ he explained.

He related a joke told to him by Fred Head (running for State Comptroller against pornographer Susan Combs):

“You know Chris, if George Bush had been president when Japan bombed Pearl Harbor, America would have invaded Australia”.

In ’05, he was starting to think about running for governor. He called Ann Richards one day and confessed that to her, and asked if he could stop by one day and find out if she thought he was crazy for thinking this. He said that Ann replied, “Chris, honey, you don’t HAVE to come by, I can tell you from here that you’re crazy.”

Chris wasn’t all jokes, though. He spoke of the failed governorship of Rick Perry, and that Democrats were waking up to their mistakes in supporting the other two independent candidates, Kinky Friedman with his recent foray into racism, and Grandma who was right there with Perry. “When Rick Perry has had a bad idea, Carole Strayhorn has backed him up, putting lipstick on the pig time after time after time. She can call herself an Independent all she wants. I can call my dog a horse, but at the end of the day it’s still a dog.”

Hank “The Auctioneer” Gilbert got up near the end. I call him the auctioneer because one of his tasks was to auction off a framed document that he claimed was the original Bill of Rights. He bullied the audience to a 2 grand bid.

Hank confesses that he is not a speaker, but just says what he thinks, and sometimes says it bluntly. Well, he was blunt when he summarized the evening in one sentence (and I am quoting – I am not responsible for which words he chose):

“We gotta get off our ass to put them on theirs.”

Truer words were never spoken.
Posted by Hal at 2:38 AM

"Then the democratic candidates for state house and senate were announced. Both Sherrie Matula and Dora Olivo were introduced on stage. Sherrie faces an uphill battle against an apparently incredibly dense, but well-funded Jim Davis in HD-129. muse is after Davis and is tracing his dubious FEC filings."

First it is John Davis, second, I dont think he is well funded. We will see on his next report. The last one showed he spent $5000 on a fundraiser that got $5800 in donations.

He spent $800 on signs just to put out around the area advertising his fundraiser. $900+ on mailings and a shitload more on food, and stupid stuff. He acts like he doesnt know what he is doing.

Who would pay $800 on signs to announce a fundraiser?

That thing is a treo!

I'm addicted to it. I admit it!