Bush Library at SMU to Take Out a La Madeleine

For reasons that eternally escape me, Texas’ Southern Methodist University wants to be the host of the George W. Bush Presidential Library. They have gone to some trouble to attract the Bush people, despite the fact that George Bush never attended the school, sticking to the Eastern Establishment’s prep and Ivy League schools.

Why not Yale, then? Heck George and Barbara paid enough money to get the boy through with a degree after all. Why not give him a library there?

Not only has Yale been a big educator of great and not-so-great presidents, they actually have 19 presidential libraries in that they house the presidential papers of 19 presidents between George Washington and Woodrow Wilson.

Only since the presidency of that unforgettable president, Calvin Coolidge, have we built edifices just to house a single president’s presidential stuff.

There was even an early competition to get Dubya’s stuff on other campuses. Bayor thought they had it in the bag, being so close to Crawford, Texas. But alas, despite the fact that Baylor has acres after empty acres of university grounds on the banks of the Brazos River upon which to build a library, it was not to be. The Bush people wanted the library in a big city it seems, and SMU found itself alone in the bidding as an urban campus. The Bush people figured nobody would visit it if it were out in the country. Good point. 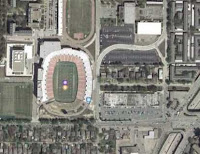 And therein lies the rub. SMU has no open acreage. The entire area is built up. Don’t believe me? Here is a Google Earth shot of the campus (click on it, it gets a little bigger). See that area in the lower right corner? That little strip next to the stadium? That area and the student housing behind it will be the future home of The George Dubya Bush Presidential Library.

Hey, maybe they’ll put a Starbucks on the corner – should be a killer location.

Unfortunately, all of those shops in that strip mall have got to go. They’re all built on university property anyway, so line up those bulldozers.

Local residents, upon hearing the news, are chiming in, in protest. From the Dallas Morning News:

“ ‘I'll be totally sick if I lose my cleaners, my La Madeleine, my drugstore, Horchow [Finale], even the bookstore,’ Highland Park resident Lori Collins, 57, said this week. ‘I love this strip.’ ”

This comes 4 years too late, you know. I wonder how many middle-aged white women would have withheld their vote for George Bush in 2004 had they known that he would be responsible for the obliteration of a La Madeleine café boutique?

It’s really still not too late. There is still another major city in the South (because you know the North will have nothing to do with this guy) where he can build his library. Ironically enough, the city I have in mind has lots and lots of open space, and has continued to have it, precisely because of George W. Bush. And I hear that land there, riverfront land no less, can still be had on the cheap.

My vote for the location of the George Dubya Bush Presidential “Liberry”? How about the 9th Ward of New Orleans, Louisiana?

LSU can sponsor it.

The lower Ninth, an excellent idea! I cn hear the phone conversation already:

I'm at the Bush library, but the' ain't nuttin' here.

Yeah you right. So, how 'bout dem Tigahs?

That is the best idea I've heard in months! It could also be gathering place for the day after Mardi Gras, when everybody's sick anyway.