Texas Primary Runoffs: Oh, To Be a Republican

It sounds like a very ho-hum deal, to have to vote for Texas Railroad Commissioner, and truth to tell, no one is banging my door down, shoving push cards in my face, or doing robocalls for either candidate.

Some I know will rear up in protest, because for them having an effective public advocate on the Railroad Commission is paramount to their interests. Uppermost in their minds. And I give them credit for their advocacy. Yes, this is an important position and the only state-wide Democratic nomination still in contention.

But I can’t help but think that my, and everyone else’s appearance at the Democratic polls this coming week is going to be a flip-flop compared to what we had on March 4th. On March 4th, Democrats showed up at Fort Bend County polls to the tune of 1.8 times that of Republicans on the same day. 13% of registered voter showed up to vote Democratically compared to only 7% of registered voters to vote in the primary of the Dark Side.

Democrats were energized by the competition at the presidential level. For Republicans the issue had been all but decided, only needing Mike Huckabee to stop and get in line with the others.

Not so in the runoff.

While Democrats in my position in Fort Bend will go to the polls to vote for either Dale Henry or Mark Thompson in their statewide Railroad Commissioner runoff, Republicans, those that didn’t vote in the Democratic primary, anyway, still have a critical choice to make: who do they think will be able to beat Congressman Nick Lampson in November.

Oh, if only I could help them out. 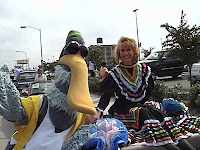 I find myself in an unique position of being a cheerleader for Shelley Sekula Gibbs. She of the pink leggings, the wacky lady who came dressed as a shrimp for the Sugar Land Shrimp Festival, and as a . . . well some sort of European peasant girl for some other cultural festival. And finally, the one who won a special election running against an oriental herb doctor, a retired career military officer, an ex high school wrestler, a Libertarian and a former Lampson opponent from the old days. 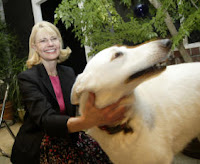 Yes, although she lost as a write-in candidate against Nick Lampson in the general election, Shelley won the special election against that crew, with a runoff not needed, and finds herself in a runoff election this time against a new foe: former senatorial chief staffer Pete Olson.

Olson, I think, would be the one who could run a credible campaign against our moderate Democratic congressman. However, he handicaps himself, somewhat, in that he must now paint himself as the more conservative of the two Republicans, which makes things tough for him in November when he runs against Lampson, someone who will draw votes from both parties and the independents as well. If that’s how Olson wins the runoff, by convincing voters that Shelley is the least conservative, then that’s good news for Nick.

If on the other hand, Shelley wins based on her name recognition and successfully smearing a carpetbagger label all over Olson, once again, that’s good news for Nick.

That must be why Nick seemed to be so happy when he showed up at the SD 18 convention yesterday. For Nick, it’s definitely “Good news, better news”.

But I still find myself in Sekula Gibbs’ cheering section right up to the end. In that, I find myself in the curious position of being in complete agreement with the blogger who authors the ultra rightwing blog “Rhymes With Right”. He left a comment here a week or so ago, which I need to bring up front.

“Yes, a brief period relative to the time he has been out of the district. It's not like the man retired from the Navy six months ago after a 20 year career. And the reality is that Olson maintained no significant connection to the district during his time on the staff of Phil Gramm and John Cornyn, which constituted the bulk of his career outside of CD22.”

“And it may shock you to hear this, but just because i support the reelection of John Cornyn, whose work in the US Senate I consider to be quite good, does not mean that I accept his every political endorsement as if it were divine revelation.”
“I'll take the candidate I know and trust.”

So not only do he and I share a common profession in the teaching of eager young minds, yes RWR is a high school teacher, he and I also see eye to eye on this issue, but for completely different reasons.

I want Shelley Sekula Gibbs to win because she will not only be the easiest candidate for Lampson to defeat in November, but also because we all should be in for a few laughs between now and then. RWR, an ardent Sekula Gibbs fan, wants her to win because he knows and trusts her.