I was wondering if my congressman, Pete Olson, was ever going to find the “Aye” button on that voting machine that he uses to cast votes on what he thinks represents what people in his district want.
For instance, last week Pete Olson found the “Aye” button and voted for HR 2,  the “Job-Killing Health Care Law Act.” That’s right. One of the first votes that my congressman cast was a vote to deny his constituents affordable healthcare. He voted to rescind the law that makes it a crime for health insurance companies to deny coverage based on pre-existing conditions. He voted to rescind the law that requires health insurance companies to cover your older children on your own family policy.
Because, you know, times are hard and getting health insurance when you are young is a luxury.
Pete Olson voted to do all of that, but not until he voted in the same voting package to keep his own government-subsidized healthcare insurance. You see, included in many of the amendments offered up in HR 2 was a Democratic-sponsored amendment to “prevent lawmakers from keeping their congressional health insurance if they repeal the new health care law for their constituents. Under this motion to HR 2 (above), repeal could not occur until a majority of members in both chambers were dismissed from the Federal Employees Health Benefits Program. That taxpayer-subsidized, privately operated program provides extensive health insurance for nearly all members of Congress and their families as well as millions of civil servants, former lawmakers and federal retirees, and their spouses.”
Pete Olson thinks its perfectly OK for he and his family to have the very same healthcare insurance that he voted to deny his constituents.
This isn’t hypocrisy. Not really. What it is, is blind greed. It’s what Republicans do best: grab as much for themselves as they can while telling you that you don’t want or need what he and his colleagues jumped through some hoops to keep for themselves.
CD 22 was sold a bill of goods. Not that we Democrats could do anything about it this time, not with Krazy Kesha on the ballot. 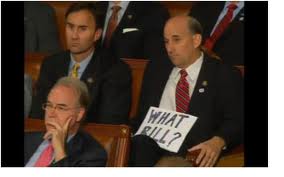 Still and all, it’s nice to see that the congressman can find the “Aye” button. I thought maybe he lost it, or worse, couldn’t decipher that “Aye” meant yes.
I’m going to enjoy seeing my congressman listen to President Obama tomorrow night at his State of the Union Message. Hopefully he will find a place right next to Looney Louie Gohmert like he did last time.
They make quite a pair.
Posted by Hal at 7:23 PM

You're right about Olson. He usually votes just like "Dr No," Ron Paul, and is equally irrelevant. I like what Juanita said: "When Phil Gramm drinks water, Pete Olson can't talk."