Do They Know It’s Christmas? 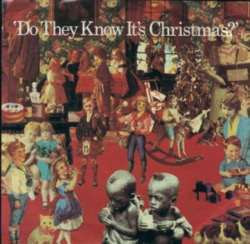 My God. Can it be that it was 23 years ago that they made the song “Do They Know It’s Christmas?” Twenty. Three. Years. I’ll bet there are people out there who have never heard the story of how and why the song was written and why it was performed by a group with the unlikely name “Band Aid”.

It was a huge collection of then-popular Irish and British recording artists put together (some say ordered together) by then-recording giant Bob Geldof. Late in 1984 word came to Europe that Ethiopians were suffering from famine (hence all the staving Ethiopian jokes – that’s where they came from). Geldof and Midge Ure co-wrote the song then got on the phone to get “Band Aid” put together.

The idea was to make the single with lots of press coverage and have all the proceeds of the sale go to sending food to Ethiopia. Over three million copies of the single sold that year.

It was such a good idea, and apparently we still have starvation, that the single was remade 2 more times, most recently in 2004.

The Band Aid Charitable Trust continues to supply food and sanitary supplies to several African nations, most recently in Darfur.

I’m not a big fan of the British, but you have to admit their greatness when they show moral courage and charity to do this project, 3 times, while we Americans all sit around at Christmas and stuff our faces.
Posted by Hal at 5:32 PM