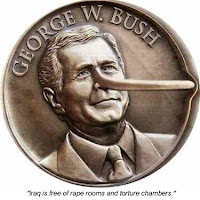 Politics make strange shipmates and today we find that both George Bush and Hillary Clinton have lost credibility now that American intelligence services have released a long-delayed National Intelligence Estimate (or NIE) that states categorically that Iran has not been trying to put a nuclear bomb together as Bush/Cheney have for so long asserted. Has not been trying since 2003, in fact.

This flies in the face of what the Bush Regime has been saying, in whipping up support for some sort of sanctions or another, or maybe even military action. The only thing I can see as different here is maybe that the CIA/NSA weren’t going to be seen holding the bag this time. The “slam dunk” high confidence that the CIA gave Bush on their estimate of WMDs in Iraq, and the subsequent absence of them was not going to be a repeat.

Rumor has it that release of the NIE had been delayed by the Bushies because it didn’t have in it what they wanted. Now that it’s out, however, it’s as if Bush didn’t hear about it or read it:

“I think it is very important for the international community to recognize the fact that if Iran were to develop the knowledge that they were to transfer to a clandestine program, it would create a danger to the world. I view this report as a warning signal . . . They can restart it.”

And what do you think this does for the intelligence community? It’s a big slap down, isn’t it? By their best estimate, Iran is not trying to build a nuclear bomb, and Bush responds “yeah, but wouldn’t it be bad if they were?”

And now Hillary Clinton finds herself in a similar position. Among the presidential candidates, she stood alone in voting for the Senate proclamation that the Iranian Revolutionary Guards Corps was a terrorist organization. This gave credence to all of Bush’s rants about Iran, and, her opponents claimed, gave Bush a rationale for going to war in Iran.

My guy John Edwards was on point with this, asserting that her vote for the resolution “amounted to agreement with Bush's worldview on terrorism”.

An interesting charge, one to which Clinton hotly retorted:

“I understand politics, and I understand making outlandish political charges, but this really goes way too far. Having designated the Iranian Revolutionary Guard a terrorist organization, we've actually seen some changes in their behavior.”

A claim that seemed to be thrown out there with no real backup. Kind of like Bush’s paranoia claim.

I am starting to wonder now, is the Iran Resolution Hillary Clinton’s undoing? It is the one issue that separates her from the rest, and I don’t think Americans are willing to go along with that anti-Iranian tripe. Hillary may be standing near the politics of fear, maybe just in case. I don’t think that’s going to work for her.

Americans are sick of being made to be afraid.
Posted by Hal at 7:00 PM