I really don’t know what to think about the latest posting to go up on FortBendNow. It seems that the county government has, in the past, enlisted the services of a group called the Fort Bend Economic Development Council to predict and promote growth in the county.

It just seems to be a little bit too much money for something that seems to be inevitable. Granted, the council may have been responsible for the gigantic population growth rate that Fort Bend County has experienced since 1960 (see figure below), but maybe, now just maybe, there is growth that is starting to exceed what has made this area an attractive place to be living in. 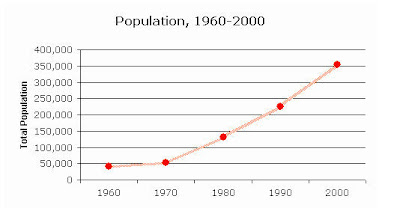 Traffic at rush hour has certainly changed in just the last few years. It is just possible that growth has proceeded at a pace that was either not predicted well – and full blame can be placed at the FBEDC for that – or that predicted growth did not keep up with infrastructure – again, who was supposed to predict that?

And is it no wonder that we are getting a poor return for our taxpayer dollars? The arrangement is just too incestuous to believe. Judge Hebert, who was making the case for this monumental increase, sits on the board of directors of the FBEDC. The movers and shakers that represented the “Keep Fort Bend Moving” campaign, the campaign that succeeded in getting voters to approve sale of $153 million worth of “mobility bonds” are all officers or on the board of directors of the FBEDC. The people who stand to gain the most from runaway growth in Fort Bend County are asking for taxpayer money to fund the very organization that will bring the old mazooma rolling in to their businesses.

Don’t you love it? An organization gets taxpayer money to promote growth in Fort Bend County so that it will enrich them and their respective businesses.

And they need an additional 100 large this year to do the job better.

You know, you hear Repbulicans whine and whine about wasting taxpayer dollars. Here we have a Republican dominated county government not only throwing hundreds of thousands of dollars at an organization that promotes county growth (something that is not in the best interests of most county residents), but the organization’s work monetarily benefits the very people who run it.

Hebert says that the 100 grand raise is to make up for the council not raising their fees for a number of years. I have a modest proposal. How about, since all these gentlemen on the FBEDC substantially benefitted from the rampant growth in this county, how about they work next year for free?

Makes perfect sense to me.

That way the county can finally give well-deserved pay raises to the lower tiered county workers.

I am characteristically pessimistic that anyone in this will take my modest proposal seriously.

" how about they work next year for free?"

Yes this clique is very much involved with our councils, boards and commissions, as well as Lampson. They have infested this community like a cancer and they want to pass the buck to us. I'm a conservative that sees them as the primary problem in the county and their "stinkin thinkin". We deserve people like Hebert, Stavinhoa, Patterson, Prestage (D) for giving them the keys to the county and our pocket books. I agree with Susan, that the chamber is by far a better investment and even small businesses can join.

Show the edc boys, who've endorsed landfills, airport expansions, segment c, for their membership...show them the highway that they over spent us on!

Thanks Hal for this piece. I'm not a Meyers fan, but he did vote against this increase...so once again all parties are to blame for sucking off these edc membership contributions and corporate tit, that takes us all to the cleaners...