Raging Against The Machine In Rosenberg: Fair Day Parade 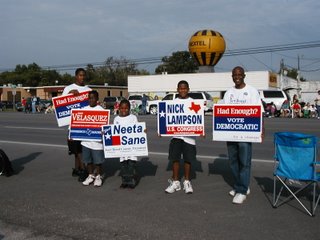 Oh I did so enjoy the Fair Day Parade.

Here in Fort Bend County, Texas, we do a County Fair whose character mirrors the diverse make-up of the county. While agriculture is emphasized there is also the carnival area, and some by-God funnel cakes.

And a big long parade.

It was my first time at this function. The parade goes right past the Fort Bend Democrats Combined Campaign Headquarters at 4800 Avenue H (Highway 90A) in Rosenberg.

Getting there is a chore, and veterans knew to go early for preferred parking and no traffic jams. Not a veteran, I set out late, and at 8:30 found myself in a traffic jam on 90A that went a mile. So we all crept forward as I eyed the glowing light on my gas gauge. But I made it, first to the gas station, then to the Lamar Plaza, which has the largest still unfilled parking lot on 90A.

Then hoofed it to the headquarters.

Susan lit into me as I knew she would, saying I show up now that they had everything all set up. The parking lot in front of the headquarters was strewn with chairs and a table. Campaign signs were everywhere.

And it looked like the Fort Bend Democratic Club was going to war.

They clapped as the bands and ROTC groups went by, they waved to the fair queen candidates, cheerleader clubs, and scouting groups.

And their voices filled the air when a Republican office holder drove by.

We all held campaign signs. Several of us held “Had Enough” signs. And as the Republicans cruised by (nearly all of them old white men), signs were waved and we erupted in a continuous chorus of HAD ENOUGH? VOTE DEMOCRATIC! Some of them took it smiling. Ignorance is bliss. I don’t think they know what is coming at them this year. Even the incumbents smiled. Wait, did I say incumbents? Isn’t that against parade rules? I just had to go and find out, and sure enough, there it is in glorious black and white pixels.

· Political Candidates: Not to include incumbents.

Well, I guess they came anyway. Judge Brady Elliot was there waving to the crowd. Nice head of hair on the man. 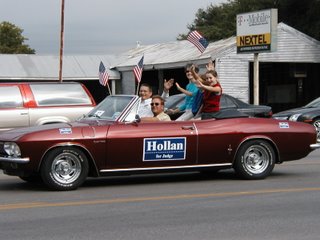 Every judge, every county commissioner (except Grady) got the same treatment. Then Al Hollan drove by and the love poured out. Among his peers, Albert has an AV rating. It's a lawyer rating for ethics and professionalism. Brady Elliott doesn't have one of those.

I was looking left and right and saw people staring at us. They were Hispanic families for the most part. They probably were wondering what we crazy gringos were doing. 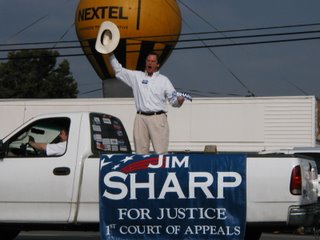 The Fort Bend Democrats float arrived early and they got the love as well. Bryan drove Marsha’s truck with a trailer hitched to the back and our candidates in the trailer. All except for Jim Sharp. He was standing up in the truck bed waving. 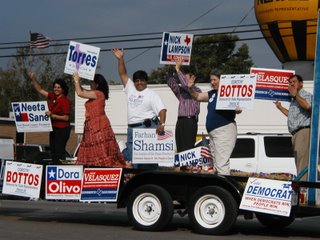 All our downballot candidates were there, each holding their own lawn sign. Farhan Shamsi smiling broadly, Neeta dressed to kill, smiling, turning, waving, smiling. Rudy Velasquez, standing tall and steady. I like Judge Rudy. He’s so calm and soft-spoken but clever and cool. We need to elect him for all the good reasons, but also so we aren’t saddled with a “Judge Bud”. Dorothy Bottos' kind face and brilliant smile washed over the paradegoers. And Veronica, stately Veronica, dressed very nicely in a peach-colored outfit. And that’s when I noticed something really uplifting. The families to our left and right were on their feet yelling, smiling and waving along with us. They were shouting “Veronica!” “Rudy!”. We were all one people united in adoration of Democratic Party candidates.

A real strong set of countywide and precinct candidates.

And Nick was there in the trailer, too.

And then who do we see coming down the road? Silly Shelley Kelley Sherrie Sekula Matula Rodriguez Gibbs. Pinkless.

Odd very odd. Picture this: two women holding a Shelley campaign banner, and Shelley not walking a few paces behind the banner for full exposure. Instead, she plastered herself to the back of the banner walking even to the banner holders.

Fort Bend Democrats railed “Had Enough” at her. She wouldn’t look our way. She showed us the back of her carefully coiffed and colored hair. Someone finally yelled “Hey Shelley, we’re over here.” That got her to look over until she realized that she had been duped.

What followed Sherrie . . . er . . . Shelley, was a wagonload of gloating, weight challenged, well-heeled white men . . . and one woman. That’s right, the Republican ticket. We were all shouting now, and then the parade came to a halt. There we were facing each other, we waving our signs, shouting Had Enough? Vote Democratic, they putting on a diffident air that slowly and surely crumbled with each passing moment of realization that they weren’t moving. They became so obviously uncomfortable that it became hard for me to shout and grin at the same time. But they were finally released from our tirade. And I went to get some water. 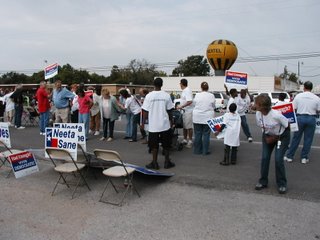 But we saved the best for Fort Bend County District Attorney John Healey. Healey professed ignorance that one of his assistant DA’s was pursuing a case in retaliation for their lawsuits against a local businessman who has given generously to his wife’s campaign. Ignorance? Fat chance. If he was ignorant, then he doesn’t have control of the office he is supposed to command. We really wanted to deliver a message to him. So we lined the street with Had Enough lawn signs, and on command we did an about face, covering our posterior regions with the signs.

Most of the GOP candidates joined in the fun. Even riders on the big GOP float came over and offered us bottles of water --- the hard way. It was in good spirits and playful teasing among neighbors.

However, there were two stand-outs: (1) Shelley who pretended to ignore us. I kinda get the idea that's what she'll do once elected. She rarely changes expressions - have you noticed that?

And (2) John Healey who has no sense of humor at all. None. Zero. There has never in the history of mankind been a man so seriously devoid of personality. Okay, maybe Judge Cliff Vacek comes close, but those two stand alone in the depths of self-importance.

It was a ball! Thanks for your report and pictures.

I'm a repub who is voting for many demos & indeps this year along with 1 or 2 repubs, but I would like it if you all would admit that Grady is much like the "good ole boys" in that he takes money from many of the same contributors and supports many of the same projects (see recent Fla contributions scandal). I think for a real honest break with the past of FB politics (a la delay and many of the commissioners) then we need to all be honest about our failings and contributions to the current system. My family and many friends are voting for Lampson and other demos that aren't taking the tainted monies and I hope this is the start of a real new direction in local politics. Dems need to do the same thing with guys like Grady (sweep them aside like many repubs are sweeping their own aside like Hebert, Wallace, Owen, Delay, etc...).

I know what you are talking about. Grady does have some things to explain to his constituents in Precinct 2. The recent revelations on the PBS&J contributions to everyone in the Commissioners Court will continue to be in the news as the story develops.

Here's what I think about Grady, and it's a personal opinion, not party line (God never assume I speak for the Democratic Party). I think that the entire Commissioner's Court has evolved into a culture of corruption. Things get done, but cronies benefit and opponents suffer. Grady is the single Democratic Party representative among the four, and their leader, Judge Hebert. Grady has to play by their rules or he is completely marginalized and won't be able to get a thing done for his constituents.

That's what I think. We need to flush the court and its culture. Replace these people with people with honesty and integrity. If Grady shows that he can work under a new transparent culture, then I hope he stands for office again.

Neeta Sane is a start. She's running against Jeff Council, a Commissioner's Court crony, for County Treasurer. She says she can work with the court, but will not let them get away with the things that have gone on there in the past.