A Rat, By Any Other Name, Would Smell As Sweet

Now that 2008 is here and Texans are finally coming to the realization that the March 4th primary is just a few short weeks away, 8 to be precise, this news has finally come to those who construct the testing calendar for the Texas Education Agency.

Oh dear. TAKS testing this year is going to fall on March 4th.

So what is the big deal? What does TAKS testing and the March Primary have to do with each other? Surely these children, none of whom are 18 years of age, will have a time conflict.

It’s not the kids, it’s the facilities. Many a voter in Texas knows that if you don’t go to a church or a community center to vote in an election, you go to a public school building. And because these schools are pledged to maintain an “optimum testing situation” that includes forbidding visitors from coming on campus during a TAKS testing day, this is causing some school districts to reconsider their roles as polling sites, as seen in Tarrant County. From The Chron:

“The matter came to a head this week when the Fort Worth school district officially rejected Tarrant County's request to use 34 campuses as polling places.”

The article goes on to say that the district softened its stance by agreeing to help the county find alternative sites.

This addresses the concern of having a polling facility, but it doesn’t address the chief concern that I want to address here: voter confusion.

What is the most confusing thing that happens to a voter on Election Day? A new voting machine to learn about? Whose names are on the ballot? Where is my voter registration card?

The number one source for confusion on Election Day is “Where do I vote?” This is especially true in areas that have had the same voting locations within the same precincts year after year. Voters know where to go to vote, until that location is changed. When voting locations change, voters fail to appear at the polls, especially if there is only a small window for the voter on Election Day: between the end of the work day and 7 PM.

This, by the way, is why it is so very important that every Democrat learns about Early Voting, and exercises their right to vote before Election Day. It certainly saves on confusion.

But back to the rat. It smells so sweet. Can it really be that this was all a machination to suppress the vote? By advancing the school calendar statewide, everything gets moved 2 weeks ahead. TAKS testing, normally taking place in mid-February is moved to March. There was a concerted effort on the part of the Democratic Party to move Texas’ primary day from March to February last year, but this was met with stiff resistance by Republicans backed by Lt. Gov. Dewhurst. At the time, the idea among Democrats was to make Texas’ primary more important in the national context before the presidential nomination had been all but locked up.

And it seemed reasonable that Republicans might want to go along as well, and for the same reasons.

Is this the reason why?

Voter suppression has become somewhat of an art form among the Republicans. Can it be that one of them saw this change in the school calendar, and how it would affect the location of polling places? Is this why the Republicans were so steadfast in their refusal to alter the primary calendar? They knew it would conflict with the testing calendar if unchanged?

I know this sounds paranoid, but as former Secretary of State Henry Kissinger once said, “Even paranoids have enemies.” 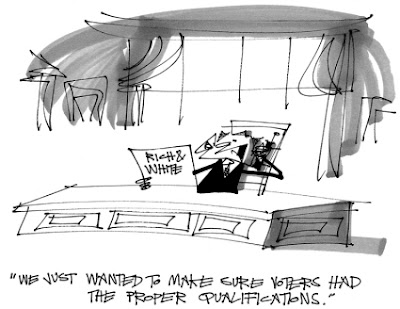 I wouldn't put anything past elected officials in either party to maintain the crony networks.

Your blog is dead.