Behold the Face of Pure Evil 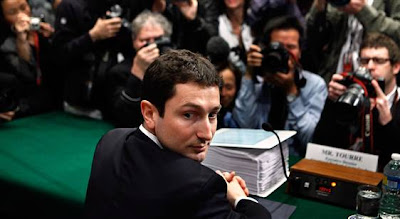 I struggle to keep up with financial matters because when it comes to the complex field that finance has become, it is all pretty much Chinese Greek to me. So when I heard about the SEC complaint against Goldman Sachs, and some guy that has come to be known as “The Fabulous Fab” I knew I was doomed to ignorance.

First, how does a guy get away working in high finance calling himself “Fabulous Fab?”

Well, who knows, maybe it sells on Wall Street, but if this guy called himself Fabulous Fab and worked in the construction industry, or on oil rigs, or anywhere in Texas for that matter, he just might find himself greased up and tied naked to a flagpole in some public place.

No, I am not anti-gay. I am a straight white man living in America and I don’t have a homophobic bone in my body. Being anti-gay is to my mind being anti-women or anti-Polish. It’s just wrong. But I know my fellow working man, and in particular I know my fellow Texan man and I know for actual fact that any one of them, upon hearing that he calls himself “Fabulous Fab” are going to ask “and you thought people wouldn’t think you were gay when you address yourself in that way because . . . ”

So Fabulous Fab got his say in the US Senate today. As a named person in the SEC lawsuit he basically denied anything that the lawsuit says that he does.

So what does the SEC say that he did that was so bad? Now I could “go long” and cut and paste the operative text, but I think this time I’ll “go short” and try to explain it in my own words, simplifying as we go.

From what I can gather, Fabulous Fab but together a deal called ABACUS 2007 (appropriate, don’t you think that he called it the name of what ancient Chinese did their algebra on?) which they call a “collateralized debt obligation” (translation: a bunch of mortgages sold on the sub prime market to people who had no intention of making the mortgage payments) and presented it to Paulson and Company. Paulson took the deal only if they could cherry-pick the portfolio and then “go short” on it. That is, bet the safe bet that it would lose money. That happened but to get the deal to go, Fab went to other investors, told them that Paulson was sinking $200 million in it – a signal that they were “going long” and that they were betting that it would make money for them. They bought in, and when Paulson did end up investing, they only put in $15 million.

The deal went south when the housing market collapsed. Paulson came out of the deal with a cool $1 billion, and the guys who went long lost about the same.

The SEC says that Fabulous Fab committed fraud in misrepresenting the deal to the other investors, the ones who got the shaft.

That this deal essentially tipped our economy over into the abyss is only icing on the cake, and I really don’t think that there is a single word in the English language that adequately identifies this crime.

But one thing is clear, if Fabulous Fab isn’t gay now, he should get used to the idea in his next place of residence.

And when his cellmates discuss the merits of “going long” with him, I don’t think that they will have their investments, or Fabulous Fab’s best interests in mind.
Posted by Hal at 7:32 PM