In Fort Bend ISD, it is RIF Day. That’s right. The local school district around where I live chose today to send notices around to its teachers that they would not have a job in their present workplace, if at all, in the next school year.

It’s also Census Day, the deadline to turn in the 2010 Census form that was mailed to an estimated 134 million households in America. Now I have looked around a bit and can’t for the life of me find out how much it takes to print, send and receive a census form but assuming printing costs of about $1 per form, and mailing costs of 2 times $0.42, that’s about $250 million. Compare that to the $384 million promotional price tag in sending the week out warning letter and the reminder postcard after the mailing, along with radio and TV ads run in all major media markets in America. But this is far less than the estimated $57 per headcount that will inevitably have to be made in costs to send human beings door-to-door to get the count right.

All in all, they are estimating that the total census price tag is going to exceed $14 billion, the lion’s share being the cost of the aforementioned human being interaction at a household doorstep.

And the good news is that as of today the Census Bureau has received 54% of the forms that they sent out – roughly 72.4 million pieces of mail.

And the further good news is that while today is the deadline, they will accept census returns by mail until April 15th.

Yes, that would be Teabagger Day.

But on May 1st, the first census takers will hit the bricks and the meter starts running with an attitude.

Now I’ve mentioned it before, here, that among the census deadbeats we have in our country, Teabaggers and social conservatives that listen to the dire warnings of Sarah Palin and Michele Bachmann will not be turning in their forms.

Being fiscally conservative, it seems, is more of a battle cry than a personal commitment.

Want graphical proof? The Census Bureau maintains a web page that puts up a county-by-county compliance rate as well as statewide return rates. Today Texas is at 47%, lagging behind the national average by 7%. This exactly tracks with the numbers reported on this blog a couple of weeks ago: 34% nationally, 27% in Texas.

Here is today’s map from that site – the largest scale allowable that shows county results. 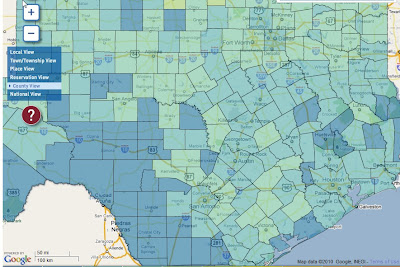 The Texas Tribune has a national map that shows national trends from a snapshot taken around the time I last posted on this. Here is that graphic. 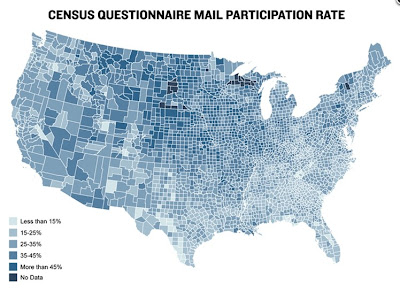 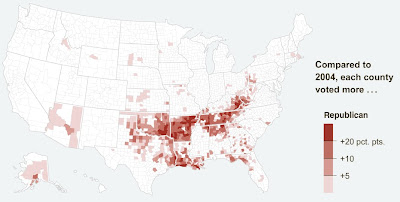 See that red belt? Look at how it superimposes on the light blue counties in the census returning rate map.