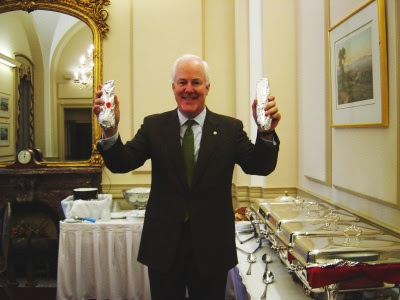 With his numbers further south than Tierra Del Fuego, the junior senator from Texas filed to appear on the Republican primary ballot in March.

He wants to keep his job.

Now wait a minute. I’ve been writing for some time now that the Republicans would find someplace to stick this political embarrassment, this Bushie rubber stamp, and replace him with someone who might win in November. It must be that the Republican machine is broken, they couldn’t find some place to put him, or that they couldn’t find anyone to run in his place. Those are the only explanations that I can come up with. My expectations have always been that Cornyn, whose approval rating stand at an all time low – rare for a senate incumbent, would get a major appointment that he could not turn down leaving Republicans to put up a candidate who might win.

Or maybe that is still in the works.

Those who attended the news conference that followed his filing were treated to another Republican candidate’s clumsy comment that Cornyn now serves as a justice on the US Supreme Court.

I kid you not. Quoting from the Chron, at the bottom of the piece:

“His background served as a lighter moment at his news conference Saturday as he was introduced by Railroad Commissioner Michael Williams, who also filed for re-election.”

“Williams was momentarily flustered by the laughter. ‘We're going to give him that one, too.’"

So what are we talking here? A brain fart from a hopelessly hung over Texas Railroad Commissioner or a giant slip of the tongue? And were we spared the indignity of another Bush Supreme Court appointment because Justice Souter refuses to retire until after Bush is gone?

Whatever. Now that it appears that he is running for his job, he has to face the biggest challenger he has ever faced. A veteran of Afghanistan, a soldier who has worked on the border. A state representative who has a progressive legislative record that includes support of health care for children in low income families.

That man is Rick Noriega. Rick, by the way, has a great story, and it is told well in the latest issue of The Texas Observer. It’s a good read.
Posted by Hal at 1:45 PM

Hal,
A friend and I met with a US Legislature this weekend at a town hall meeting. After the others left he granted us a private discussion of politics in general. I was curious why he had voted on various bills the way he did, what are his plans for the election and promised to keep some of his statements from becoming public for a while. One statement I did not promise to keep still on was his interpretation of the US Senate race in Texas.

He didn't seem to think that Rick Noreiga could beat Cornyn. He said that he wasn't experienced enough to be a US Senator. I took exception to that remark stating all of Ricks' experience in the Texas State house. His answer was that the State House was nothing like the DC/Beltway US Senate. I asked if he had met with Rick and was told that he talked with him many times.

Well, to anyone who is interested, I have met with and know the whole family. A better example of True Democracy and the caring of ALL individuals is unequalled by any one that I have met in the political arena. Their honesty and caring of individules is beyond any thing that goes on in DC. Rick will NOT sell out to the highest bidder for his job. Rick & Melissa Noreiga; Dr. Charles and Connie have the highest standards and are smart to boot.

Get Well Connie, we have parties to go to.