The Iraq Holocaust: Laying the Blame 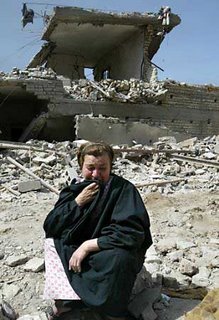 Yesterday, as American families reunited and gave thanks for the bounty that they share in a nation of liberty and laws, 154 people were killed and 257 wounded in what has been described as the single deadliest attack since the US invaded Iraq in 2003. They occurred in Shiite controlled Sadr City, and they were almost immediately answered with reprisal attacks in Sunni-controlled neighborhoods. Nine more died in those attacks.

Who is to blame?

Well, first there is 1100 years of history that is to blame. Shi’a and Sunni differences were magnified in 931 when the one caliph that the Shiites recognized as a true descendent of the Prophet Mohammad went missing. Sunnis still had their Islamic leaders, but even they were set aside by the Turks in 1924, when the caliphate was abolished. The Turks were being westernized, and that spelled death to traditional Muslims whose faith decried Western cultures and traditions. Westernism is anathema to traditional Muslims.

Comes Gulf War I and American troops are emplaced on Saudi sands. Westerners standing on the land of Mohammad. It was this that set Osama bin Laden off. That and decades of perceived destruction of the Islamic faith by westernism.

Bush, Cheney and Rumsfeld see their chance and cobble up a story on “Weapons of mass destruction” in Iraq. Sabers rattle, flames of fear are fanned, and boom, boots back on the ground in Iraq. Western boots, carrying Western soldiers with Western ideas. Ideas that are anathema to Muslims who simply want to retain the religion that has been attacked and abused every day since the Turks abolished The Caliphate - their only worldly link to Mohammad.

The blame, it seems, can be spread around. But the blame for the horrendous mess that has been created in Iraq, this time, can be placed squarely on the shoulders of three men:

They have the blood of tens of thousands of Iraqi men, women, and children on their hands. They have wasted the lives of 2872 American men and women in a war that never should have happened. They have maimed and scarred for life nearly ten times that number.

It all has to end.

“The idea that America is going to save the Arab world from itself is seductive, but it's wrong. We have watched in Iraq an excruciating demonstration of our inability to stop the killers. We aren't tough enough for it or smart enough -- and in the end it isn't our problem. The hard work of building a new Middle East will be done by the Arabs, or it won't happen. What would be unforgivable would be to assume that, in this part of the world, the rule of law is inherently impossible.”