Dubya to Dad's Buddies: "Stick It" 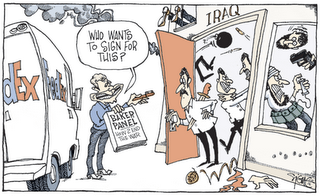 Can’t we get it right?

Out leaks the findings of Dubya’s Dad’s friends, “The Iraq Study Group” headed by Bush-41’s friend and Secretary of State, James Baker, and what have we got in store for us? Nothing. The plan is Dead On Arrival.

Bush repudiated much of it in a speech today in Jordan after his summit with the Iraqi Prime Minister Nouri al-Maliki .

We can’t even say that the ink wasn’t even dry before he rejected the plan. He was that fast with his reaction.

The group’s findings and plans were not due to be announced until next week, but you know how it is with DC politicians, what’s the good of having a secret if you can’t share it with friends?

So when Dubya heard about what they were going to recommend, he did what he does best. He ignored them.

That’s how we got in this mess, you know. Bush-43 ignoring what he doesn’t want to hear, listening to the two neocon hounds of hell, Cheney and Rove.

Gradual pullback of 15 brigades in Iraq, without a specific timetable.
Increase diplomacy in the region and include Iran and Syria in the dialogue
Shift military operations from combat to training.

Bush rejects the first one absolutely chiding the group about the use of the term “graceful exit”:

“This business about graceful exit just simply has no realism to it at all, whatsoever”

He also rejects the notion of any kind of involvement of Iran and Syria in any diplomatic discussions. This clearly has the markings of Cheney all over it. Cheney is the one who calls Iran a nuclear threat. That’s brilliant. They’re a nuclear threat so you don’t allow them into a regional discourse to promote stability.

By the way, when Dick was CEO of Halliburton, he had no trouble doing business in Iran through his foreign subsidiaries. Yeah, they’re terrorists, but their money spends just like everyone else’s.

The last item is just about the only thing Bush could get behind because that’s what his plan, if you can call it a plan, calls for.

But even that item in the plan has critics. US military advisors observe that you can train them all you want, Iraqi soldiers seem to have a national quirk when it comes to soldiering. When a shot is fired at them or near them they respond with what has been termed a “burst reaction”. They empty their weapons of all ammunition – even at a single sniper shot.

It’s hard to bring a civil war under control if you can’t keep ammunition in your guns long enough.

So here it is, 3 weeks from a slam dunk Democratic victory based in large part on the Iraq (Civil) War, and it’s like we weren’t heard. Oh, yeah, Rummy got fired and George agreed to let his Dad’s buddies offer helpful suggestions.

You know, you just have to wonder if he’s playing “Good Cop, Bad Cop.” He’s a lame duck president whose only job is to preserve the office for a Republican. What better way to do it than to strut around shouting down the thronging masses who know that the only way to save Iraq is to leave it? A bone thrown to the mad hugger?

If that’s the game, then our soldiers are spilling their blood not for oil, not for nothing, but for getting a Republican elected president in '08.