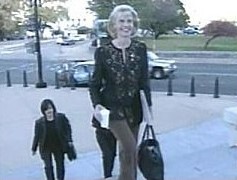 An interesting to and fro exchange of comments to reporters surfaced today and last night. A KPRC reporter interviewed Shelley Sekula-Gibbs, new congresswoman for Texas CD-22, about the mass exodus of her DC and Stafford staffers – all ex-Tom DeLay personal staffers.

KPRC: These staffers worked for “The Hammer”, who was a difficult man to work for, but these self same people could not work for Sekula-Gibbs. Feeding her the answer, KPRC asked whether it is because they weren’t used to her as a boss. Sekula-Gibbs answered in her own way, that the staffers weren’t working for anyone for almost 6 months and it was too hard for them to make that adjustment. She was also thinking that perhaps they were under some pressure because "sadly they were about to lose their jobs at the end of the year."

Yeah, that’s what I’d do if my boss quit. Wait around for 5 months not looking for new positions, and then when the new boss does show up, freak out and quit.

Lead staffer David James, wrote in a statement “The staff members have a combined thirty-plus years of experience working on the Hill. Never has any member of Congress treated us with as much disrespect and unprofessionalism (sic) as we witnessed during those five days.”

On the missing computer files, James explained that the office computers "were scrubbed and reconfigured by an outside vendor in the days immediately prior to her assuming office," as House policies require. The new congresswoman was given a copy of everything "electronically or in hard copy, or both."

Sekula-Gibbs countered that the missing files she was after were not ones of the previous administration. They were files for her administration: work that she had asked them to do when she hired them.

When she hired them?

Election Day was 7 days before the infamous walkout. Theoretically, she could have hired them the next day. How much information could be missing in a 6-day effort (that includes a weekend) and 5 days to find out about “the dark side” of Shelley?

I thought all of the bizarre twists and turns that began in early January with a midnight phone call to a Fort Bend County Republican chairman would be over on November 8th. I’ll bet everyone else thought so, too. But no, DeLay’s hand-picked successor hits town with such a fury, and then called for an investigation into scandalous and suspicious behavior on the part of her former staffers.

But you know, I think I heard some candor from the woman at the very end of the KPRC piece. Asked about her re-election plans, Sekula-Gibbs said that she had none at the moment, and also allowed that having this affair so prominent in the news was not to her liking.

But I am also a cynic, and I’d swear that she is reveling in all the attention. Whatever attention, it doesn’t matter as long as there is a camera and a microphone in her face.

Conversely, Sugar Land residents are chagrined at all of this. One woman interviewed, gave an embarrassed laugh when she acknowledged that the whole country must know about Sugar Land by now.

But I must protest. Tom DeLay is from Fort Bend County. Just because CD-22 was represented by a Sugar Land resident doesn't mean Shelster is from the same place. I think it's time to announce that this embarrassment is a resident of Clear Lake.

I've been working the Clear Lake angle on my blog. I'll be more obvious!