Number One Turkey of the Year: Shelly Schulla Gibbs 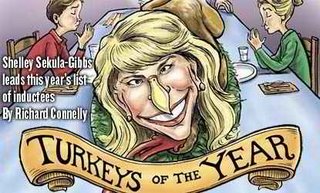 Just when you think you’ve heard the end of Shelley Sekula-Gibbs, out comes the Houston Press with their Turkeys of the Year Awards.

Shelley’s been really good at laying low after kicking up some dust and throwing foeces around the office over her (Tom DeLay’s) staff walking out on her en masse. You’d think that they’d just leave her alone, now.

No, not on your life. We need ever to remember how 76,940 voters in Texas CD-22 voted for the Clear Lake Flake to serve out DeLay’s unexpired term. As you will recall, that’s just shy of Nick’s vote count in the General Election . . .

I know, I know, I know, some of those votes were Democrats who wanted her to win so Houston could spend $2 M to fill her unexpired term with someone of substance, but the rest of them are probably still tending the blister that is on the end of their dial spinning finger in mortification and disgust.

The best part of that article, in my humble opinion, is the first reporting I’ve seen of how voters registered their votes for the write-in candidate with the most complex name in the history of history.

"The name ‘Sekula’ was spelled as Sektula, Sukla, Sequila, Sedoko and Sedoka (by puzzle fans?), Meklua, Sekluda and Shecola. One voter couldn't be bothered, just putting in SSG. (It counted.)"

"Another, for some reason, entered Sekula Smith. Another voter entered ‘Shelle Sekula Fibbs,’ which might have been a hidden political message. Not so hidden, but counted as a vote just the same, was ‘Shelly DraculaCunt Gibs.’ (We like to imagine the bipartisan discussion on that entry: ‘Well, they misspelled the first and last name, but that's definitely a Shelley vote.’)”

This harkens back to a previous posting of mine on what Elections Administrator J. R. Perez was going to count as a vote. Can you imagine, with the variance of spellings we have in this short list, what would have developed in a court battle had the Clear Lake Flake’s numbers been around Nick’s?

Voters in CD-22 would have been the collective laughing stock of the country. No small feat when you consider the depth of the field this year.