Weapon of Mass Destruction: The AK-47 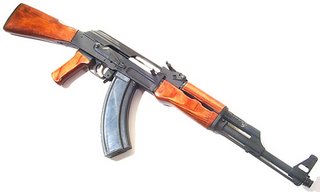 Want a good read to round out your holiday weekend?

I suggest Larry Kahaner’s Op/Ed piece on today’s Washington Post. It’s about the invention, proliferation and use of the AK-47.

Kahaner makes a point that I find chilling:

The existence of the AK-47 is responsible for making small regional squabbles that would ordinarily burn themselves out in a few weeks and months, into protracted wars.

In the chaos that followed the fall of Baghdad, Saddam’s armories were looted and millions of AKs and other small arms were placed in the hands of nearly anyone who wanted one. This and the fact that AKs are durable, do not require repair facilities in a country that could not support them, and everyone seems to know how to work one:

"For better or worse, the AK-47 is the weapon of choice in that part of the world," said Walter Slocombe, senior adviser to the CPA [Coalition Provisional Authority]. "It turns out that every Iraqi male above the age of 12 can take them apart and put them together blindfolded and is a pretty good shot."

And this week, the US will have been fighting the Iraq War for a longer time period than the US was involved in fighting in World War II. There is no end in sight, although an end will surely come now that we have a new political environment in DC.

So why has the Iraq War dragged on? The AK-47 is one reason.

Iraqi righteous fury at the presence of US troops is the other.
Posted by Hal at 3:43 PM