Who Won the Debate Last Night?

If you are a regular reader of this blog, and I know that 6 of you are, you know that I have very strong opinions on how my candidate fared in his first debate against John “I know how” McCain.

Now I know that not everyone shares my view. Like just about everyone who votes a straight ticket for the party of the Dark Side.

It’s true. The Fort Bend Democrats have a booth at this year’s county fair and the overwhelming consensus among the nasty people who stopped by to unleash their bile on us was that McCain was victorious.

Here, by the way, is what the booth looks like in case you miss it in Exhibition Hall C. 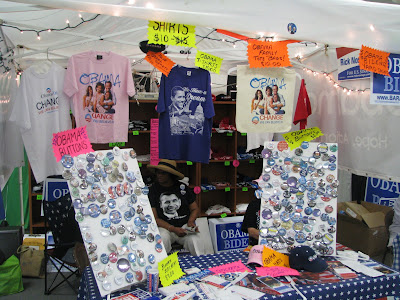 But the people who stopped by to make donations for our campaign buttons, signs and T-shirts seemed to be of the opposite opinion.

And now David Plouffe, of the Obama campaign, provided Obama’s supporters with the results of the CBS and CNN News poll taken after the debate:

In a CBS News poll, uncommitted voters see Barack as the debate winner. When it comes to the economy, 66% say Barack would make the right decisions versus 42% for McCain.The CNN poll results were also clear:

Who did the best job tonight?

Who would better handle Iraq?

Who would better handle the economy?

This is not the news that the McCain campaign needs right now. He needed a clear win to erase the effects that resulted from his wildly careening statements on the economy last week, and his “campaign suspension” that never was.

He needed a clear incontestable win, and he didn’t get it.

My humble opinion is that in this race, Republicans and Democrats have switched roles. They traded sound bites with wordy pitches. Karl Rove knows how to do sound bites and zingers. He knows that these are two things that Americans love. They don’t like to read lots of words, let alone listen to them. They want short sentences that will entertain them.

And they love zingers.

Sound bites and zingers. If you don’t have them, or don’t know how to use them, you have no business running for President of the United States in the 21st century.