Evangelicals Stumped On Who to Support For President? I Have a Suggestion

There is a good analysis article in the Washington Post today. I first heard about the conservative evangelicals’ problem first last May, when conservative evangelical and founder of “Focus on the Family”, James Dobson said he would stay home and not vote rather than cast his vote for Rudy Giuliani, and then a couple of weeks ago when Dobson was threatening to support a third party candidate if Giuliani is nominated by the Republicans.

Democrats collectively drew in their breaths for a second at that announcement. By a best guestimate, the conservative evangelicals in the Republican Party count for about 25% of the total. Some say 27%. No matter. That’s a lot of 3rd party votes that guarantees a Democratic shoe-in, in November. Oh, I love me the Electoral College.

This is huge. These voters, these conservative evangelicals are faithful primary voters. On primary election day, they show up at the polls in great numbers. They are probably the number one reason why George Bush is in the White House today as they presented a huge bloc of votes at the primaries in 2000, and saw to it that Bush’s challengers were defeated.

But as of today, not one of the Republican candidates appeal to these people.

In today’s piece, not one of the leading Christian evangelicals has a clear choice, and today, one who might have had half a chance at their votes, Sam Brownback, announced his departure from the presidential race.

Of all the various candidates, only Mitt Romney has picked up an evangelical endorsement from Bob Jones III. But most evangelicals have a problem with Romney because of his former pro-choice stance, and his belief in what they, in their view, consider an extra-Christian religion.

Perhaps summing it all up for these Christian conservatives is this from Bill Stephens, the executive director of the Christian Coalition of Florida:

“Our voters would rather stay home than vote for half a loaf of bread. They either want the whole loaf, or they'll wait for next time.”

Now that is a very good idea. Very out of the box. Why vote for half a loaf? I have an even better solution for their woes that almost worked here in the CD 22 elections here in Texas.

And a write-in candidate that I think they can all get behind like nobody’s business: 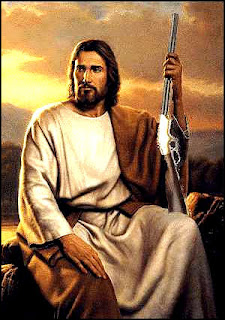 Think of it. No one would have to ask the question anymore: ”What would Jesus do?” They’d have the Guy right there. Okay, so he died 1,974 years ago. When Reagan was in office no one made that point back then, did they? And they could put Rudy Giuliani on the ticket for Veep to smooth the ruffled feathers of the party centrists.

Jesus and Giuliani, the ticket made in heaven.

And just to prove that I don’t have an original bone in my body, Google “Jesus for President” and you get this site.
Posted by Hal at 7:20 PM

Your blog incorrectly states the Mike Huckabee withdrew from the presidental election. It was in fact Sam Brownback who calls it quits today.