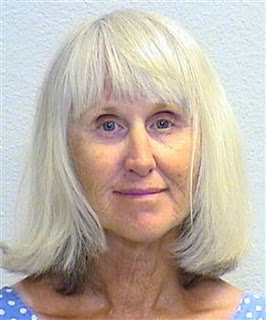 Waaaay back in the 1970’s we had terrorists, too. But back then they weren’t sent to , and they weren’t “Renditioned.” Basically the police fought them, some died, some were captured and tried, and some escaped.

That was the story of Sara Jane Olson (neé Kathleen Jane Soliah) who, as a twenty-something joined a dysfunctional terrorist group headed by a charismatic, but demented leader named Donald DeFreeze, but who called himself Cinqué (although he pronounced it sin-QUEUE) after the leader of the captured Africans who rebelled on the slave ship “La Amistad” in the early 19th century.

During her time with the Symbionese Liberation Army, she apparently abetted in the attempted pipe bombing of a police officer as he sat in his patrol car (the bomb failed to explode), as well as being there when a 40-year old woman was shot-gunned to death during an SLA bank robbery.

But after the famous shootout between several members of the and 300 or so LAPD officers, Olson fled to , changed her name and became a productive member of the community.

I recall that day in 1974 very well. The local CBS affiliate in LA, KNXT, had just acquired a new kind of technology that they called a “mini-cam.” It was one of the first field uses of video tape technology, and the first time something like this was caught on tape for live prime time airing. The scenes, commonplace today, were riveting at the time. It took no time at all for all other news stations (and then national news) to pick up the feed with these live scenes as the house that the SLA had commandeered was surrounded, bombarded with tear gas canisters, and then erupted in a massive volley of return automatic fire.

So Olson escaped that madness and lived for 25 years in comparative peace, marrying and having children.

Only to be identified in 1999 by a tip from the “’s Most Wanted” television show.

A show, ironically, that made its bones using video tape made at sensational scenes of police chases and captures.

Olson was tried and sentenced for her participation in the crimes, and has now served the minimum sentence of 7 years at the Central California Women’s Facility in Chowchilla. She will be paroled to her mother’s residence in , which she hopes to use as a point of departure for a final reunion with her family and friends in .

Olson will not be problem free, however. Despite the fact that her family and friends are waiting to welcome her back to the life she made while in hiding, others, who made a financial killing on her unmasking, are waiting in the bushes.

gun store owner Mark Koscielski, who sold bumper stickers back in 1999 that said "Fight Terrorism — Jail Kathleen" is back in the news pronouncing his sentence upon her: “She's a ... terrorist and she shouldn't be out of jail.”

Now that the words “Terrorist” and “Terrorism” carry new meaning, this should prove to be a boom year for Koscielski. Who knows, he might already have T-shirts, bumper stickers and coffee mugs already for the coming market. Koscielski probably isn’t doing too badly anyway, given the “Obama Effect” that has taken over frantic gun sales nationwide, and is responsible for the fact that you can’t get a single shotgun shell or round for your “nine” in Oklahoma to save your soul.

Good Grief Hal, has the Nation gone MAD? The woman served her time from a totally different era. She is a productive citizen and now a law abiding person. The Right-wing nuts should read their Bible about those who forgive and love the sinner since we are ALL sinners, if not at this moment, at least some time in the past.