Energy Independence: Why “Drill Here, Drill Now” Is Not an Option

President Obama’s budget, submitted this week, contains within its $3.6 trillion price tag something that will finally put the on the path of energy independence.

Obama’s budget makes a provision for tax credits for research and experimentation by making it a permanent fixture in tax law.

“Overall, the budget would invest billions in research designed to reduce climate change and guarantees loans for companies that develop clean energy technologies.”

This is brilliant. It takes R&D out of the hands of the government, where it has shifted in recent years with government funding of private research firms. As anyone who has dealt with government funded research, this is a virtual bottomless money pit with no formalized objectives, no measurement of performance vis-à-vis attainment of objectives, and no mechanism for implementation of results.

But that system does have an endless paper trail of requests for more funding.

Instead, energy companies are again given tax incentives to run their own research and development. Granted some of the above still occurs, but with accountability measurements in place, there are fewer places to hide excess.

In this research effort, emphasis will be on research to reduce climate change (i.e. reduce emissions of greenhouse gases), and on development of “clean energy technologies.”

Noticeably absent from his budget is the emphasis on current energy technology. That is, exploration and development of oil and gas, or the funding of such.

In actuality, as reported at USA Today, Obama’s budget calls for the ending of numerous tax breaks that the oil industry has enjoyed in the past, and penalizes oil companies for sitting on their proven reserves without developing them.

“The plan put out Thursday would repeal tax breaks intended to spur oil and gas exploration and penalize companies that don't develop wells on land leased from the government. It could raise tens of billions of dollars the next decade.”

In other words, we are finally ending the insane policy of paying oil companies to explore for their own oil reserves, and giving tax breaks for sitting on their proven reserves.

And why not? Weren’t we last year beset by Republican chants of “Drill, Baby, Drill” and “Drill here, Drill now”? These aspects of the budget provide just the carrot, and just the stick, to get that done, right?

So now, all we need to wait for are the shrill cries from the sunset oil industry that the government is doing all it can to drive down domestic oil and gas production, driving up the rate at which we import oil.

OK, for those crying shrilly, I’d like to post this table of the 17 most prolific oil and gas producers, in the world. Here it is, read it and weep. 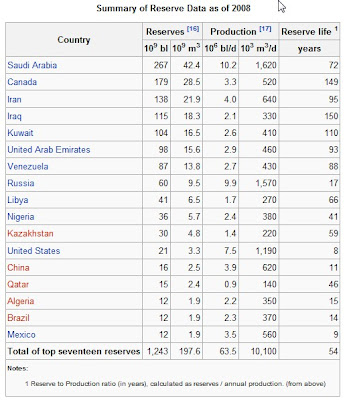 The has 21 billion barrels of domestic oil reserves and 3.3 billion mcf of gas reserves, enough for a reserve life of 8 years.

Contrast that to and . If there were places to drill, baby, those are the places.

This table screams to those who want to listen that the United States should take itself out of the business of drilling until there’s no tomorrow, because tomorrow will come sooner than we think. It roars that we should invest full bore in alternative energy sources.

Which is exactly what the Obama budget it targeting.

Now, what were the objections to Obama’s budget again?

First step get ALL autos off oil products.