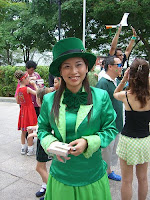 I know. This day, March 17th is celebrated the world around as St. Patrick’s Day.

Like the world famous St. Patrick’s Day parade in Singapore.

Mainly, it’s a chance to drink lots of beer in honor of some guy who lived in the 5th century and converted lots of Picts to the local version of Christianity.

And allegedly got rid of all the snakes in .

I am told, however, that this was taken care of a few millennia before, by huge thick ice sheets that also converted Irish soil to “rocks and.” As in “rocks and clay” or “rocks and sand” or “rocks and rocks.”

But I like to remember this day the way the folks in remember it: Evacuation Day.

On , the British army under Sir William Howe, which had laid siege to the city of for eleven months, had to beat a retreat to the sea. This was the only option left to Howe when he saw that ’s army brought cannon captured at up to , effectively rendering Howe’s army’s security completely compromised.

I am also told that the watch word that was used by ’s troops on that day was “St. Patrick.”