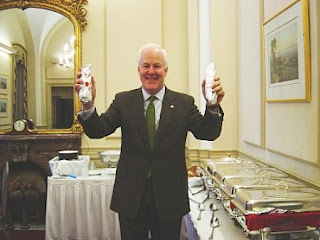 Here is what my Senator said today about the possibility of establishing a “Truth Commission,” as proposed by Senator Patrick Leahy. A body that would look into allegations of abuse of power by the Bush Regime.

“The idea that this so-called Truth Commission would somehow resolve the good-faith disagreements ... is just asking us to believe in the tooth fairy.”

Now it is possible to get behind the realpolitik stance of moderate Republican Arlen Spector, who said that Democrats “can walk in the front door” of the Justice Department and “ask directions to the relevant filing cabinet.” Mainly because that is happening already. Day by day new revelations are coming out about all sorts of unconstitutional legal opinions proffered by Justice lawyers after 9/11. Really all we have to do is look in and see what has been filed.

But Leahy is also correct. This needs to be a matter of public investigation, and should be bipartisan, or if you will, non-partisan.

But that won’t happen as long as you have brainiacs like John Cornyn in there stirring up the pot, calling acts and deeds that were arguably illegal if not immoral, “good faith disagreements.”

Did Josef Stalin have a good faith disagreement with the people he and his surrogates sent to the gulags?

With the people he had double tapped in the basements of Lefortovo Prison?

Let’s set up a chamber in the basement of the Capitol, and let’s line up all the ladies and gentlemen of Congress who have a “good faith disagreement” that waterboarding is not really torture, John Cornyn can stand at the head of the line. Let them in the chamber one at a time, then stuff a wet rag down their mouths, tie them to a board so their feet are slightly elevated over their heads, put a wet cloth sack over their heads, and then poor water in their mouths through the sack.

All the while asking where they planted the bomb.

And not stopping until it is found out where it is.

My guess is we will have a few fewer “good faith disagreements” by the time we go through that line.