Cornyn Cuts Up: Coleman/Franken Contest Will Take “Years” to Resolve 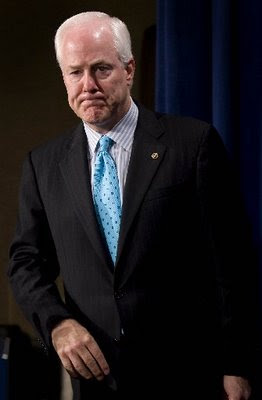 What a guy our Senator from is. What a cut-up.

Today, not only did John Cornyn predict that it will take “years” to resolve the Coleman/Franken Minnesota senatorial contest (that guy . . . what a jokester), but he predicted if in the meantime, it doesn’t take years, and the victorious Democratic Senator-elect is finally seated, World War III will erupt.

No, really, that’s what my senator said.

Now, as I recall, World War I started when an anarchist set off a bomb that killed Archduke Ferdinand in . That and a bunch of secret mutual defense pacts. And World War II began when Hitler and Joseph Stalin played a little “one for me and one for you,” splitting a sovereign Polish state between them.

World War III, in John Cornyn’s opinion, will break out when Al Franken takes the seat awarded to him by 254 voters.

Or maybe he is just speaking figuratively, do you think?

As in World War III is an unthinkable proposition and we just don’t want to go there.

Well I can tell you that unlike the real World War III, John Cornyn’s make-believe World War III is far and away long overdue.

I would love it if the Grand Obstructionist Party screamed bloody murder when ’s Supreme Court comes to its final, and also long overdue decision that Al Franken won the November senatorial election.

Just think of the imagery. The Grand Party of NO brings the government to a screaming halt in protest over this seating. The government stalls, Wall Street tanks, and the economy augers into the ground. Net result? Republicans elect dog catchers and that is all for another 200 years. Or better yet, failing to ruin this country the GOP tries to grab another federal office by having the whole thing decided in the US Supreme Court. A thing that Cornyn hopes . . . er . . . thinks will take years. Just lay back and think on it. What an opportunity to show that once again Republicans cannot pull it off in a contested election, and run to their 4 sure-thing Supreme Court justices, hoping against hope for yet another coup d’état.

Because we now have an 8-year long perspective on how well it turned out the last time they did that.

World War III? To quote the former president, bring it on.

That's our bought and paid for local red necks for you.