That’s right. It is just around the corner. Anyone who wants to stand for election in local school boards or in city elections need to get their paperwork filed by the end of the business day on Monday March 9th.

This also means that if you have moved since the last election, and are new to the area, you need to register to vote by March 9th in order to be eligible to vote in these very low turnout elections.

If you vote in these electi 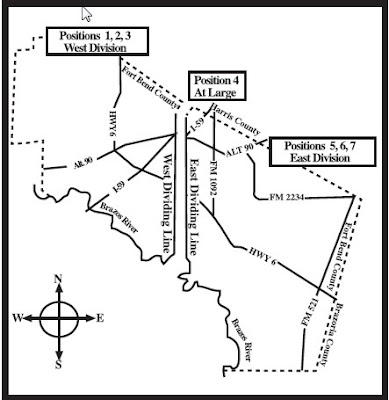 ons, then I probably don’t have to remind you.

In Fort Bend ISD, there is one open seat on the Board of Trustees. Steve Smelley, currently occupying Position 6, has announced that he won’t run for re-election. In order to run for Position 6, you must reside on the eastern side within Fort Bend ISD’s boundaries.

The dividing line between East and West is shown on the right. Where it really lies is really up for grabs as this map, lifted from the Fort Bend ISD information page on trustee elections, is of almost no help.

Position 2 is also up for this years’ election. The position is currently held by Sonal Bhuchar, who, it is understood, will be running for re-election.

Lamar CISD will be holding elections for 4 of its Board of Trustee members. These are now 4-year terms as discussed at this LCISD web page.

Trustee positions for Districts, 1, 2, 3, and 6 are up for election this year.

While these positions seem mundane, and do not pay a red cent, the importance of local school board elections are often underplayed. School boards decide tax rates. They decide how tax money is to be spent. They choose who district superintendents are to be.

Tip O’Neill said it best when he emphasized how local elections, while not as sexy as national elections, are the important ones that all voters should be concerned with:

“All politics is local.”

UPDATE: I hate loose ends and the fact of the matter is, the FBISD map is virtually useless as a tool to help someone decide whether they are living on the East Side or the West Side of the Fort Bend Independent School District. So I have taken matters into my own hands. If you look at the two little squiqqles in the Brazos River trace, the ones that occur just inside the East Side boundary, you can conclude that the line crosses the river at the inner bend of the second squiggle. Taking that to Google Earth, I have determined that the East/West boundary falls on a line of longitude, specifically 95 degrees, and 35 minutes West.

No thanks are necessary. Public service is its own reward.