If you missed the Fort Bend Democrats’s first ever East Side Headquarters grand opening, then I have some pictures for you to see. There’s more over here on flickr courtesy of Susan. 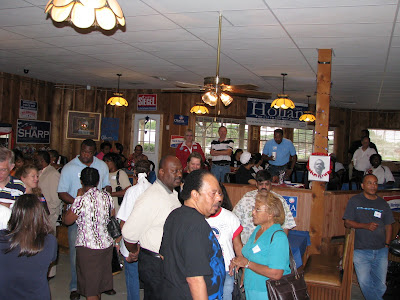 This was taken right at about the starting time, 6 PM. See how nice this place is? It’s not quite the polished wood block paneled walls in offices that you find associated with the Dark Side, but it’s a little nicer than the Democrat Shack we have in Rosenberg. 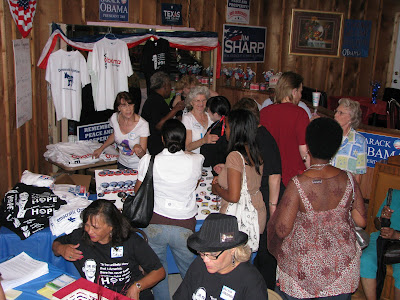 Here is the Fort Bend Democrats Boutique. T-shirts were hot items.. We also have those wrist bands, buttons, bumper stickers, yard signs, rally signs – all that stuff you just can’t find in stores. 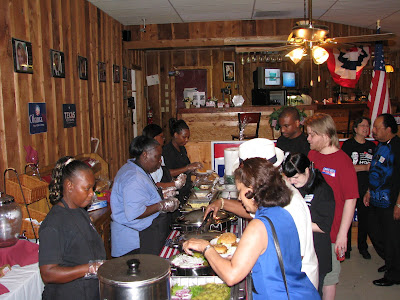 Then someone rang the dinner bell and the line formed for a plateful of barbeque. This barbeque was unique in that the plates were filled with lightning speed. I never saw a line move so fast. 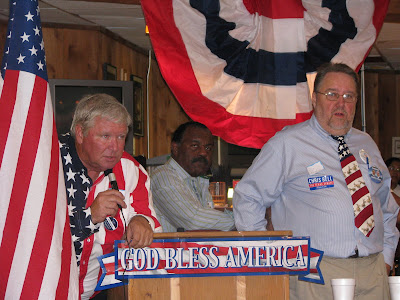 Then the speeches began. That’s Skip Belt wearing Old Glory speaking into a microphone that wasn’t working. Skip was responsible for getting this space and setting it up. That’s Susan’s “Bubba” with the donkey tie. 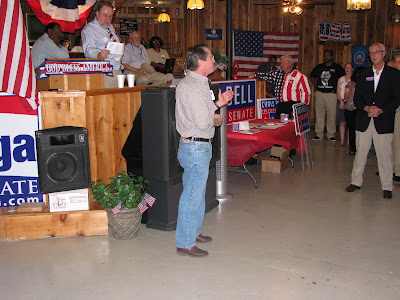 Then the candidates were invited to address the crowd, and we had a few of them there. First at bat was Jim Sharp who is running for Texas 1st Court of Appeals Justice. Sharp (that’s Sharpe without the “e” ) came within a hair’s breadth of winning his race in ’06 and there’s hope in the air for this race. 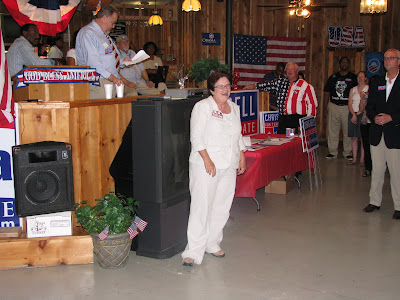 Then Leslie C. Taylor, who is also running for Appellate Justice, just another place on the court came up. I have to admit that Leslie Taylor has got to be about the most ubiquitous candidate I have ever seen. She shows up for everything, and has even been to the Fort Bend Democrats’ regular monthly meeting. 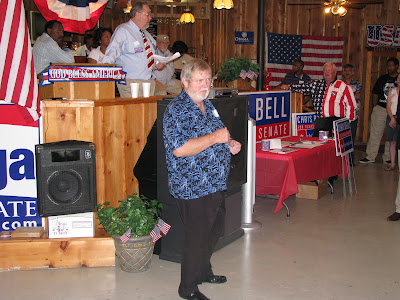 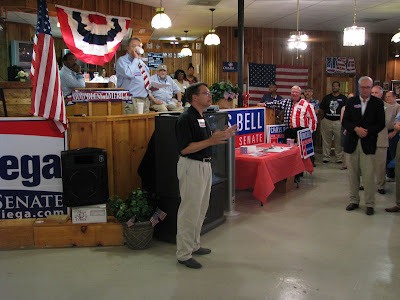 and Albert Hollan, who is running against a Perry appointee in the newly established 434th Judicial District.

Albert was the first to point out to the crowd that this year we all must vote a straight Democratic ticket. In a presidential year, especially when there is such energy in this presidential race, the downballot candidates can be overlooked. Albert urged the crowd to tell people that they have met these downballot candidates and saw that they were good people and good Democrats, and to vote a straight ticket. 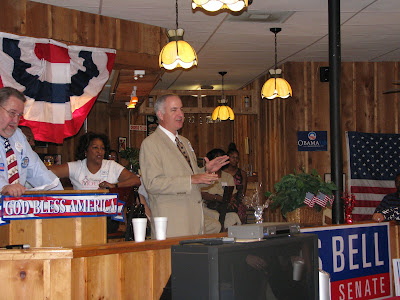 Then Richard Morrison, who first showed that Tom DeLay was vulnerable in 2004 came up. Morrison is running against a Toll Road Loving Republican for what is going to be a hotly contested race for Fort Bend County Commissioner, Precinct 1. Morrison told an amazing story of the growth of Democratic voters in a precinct next to his. When he ran for congress there were 17 Democrats listed, but the numbers from the March ’08 primary showed many times that number. 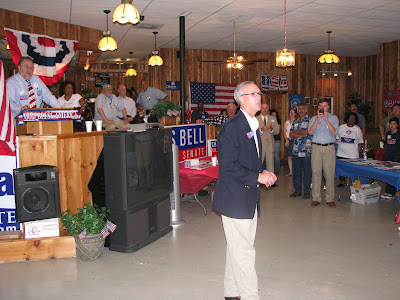 Morrison introduced his friend Chris Bell, who placed second in the gubernatorial race in 2006. Bell, sporting some new eyewear this year, is running in the Special Election called by Rick Perry on November 4th to replace Republican State Senator Kyle Janek, representing Senate District 17, who stepped down just shortly after being re-elected, but not shortly enough so that Perry could call a special election before November. The good news is that it sounds like the special election will appear at the top of the ballot rather than the bottom. Bell cited some stats that make this race one to watch closely. 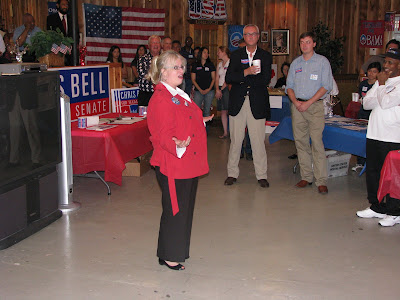 Now Rick Noriega is upstate somewhere campaigning, but his wife, Houston City Councilwoman Melissa Noriega (aka “Mrs. Rick”) was in town to speak for her husband who is in a head-to-head race to unseat Texas’ junior United States Senator “Big Bad” John Cornyn. Hey, I just noticed something. Melissa and Chris Bell have similar taste in eyewear. 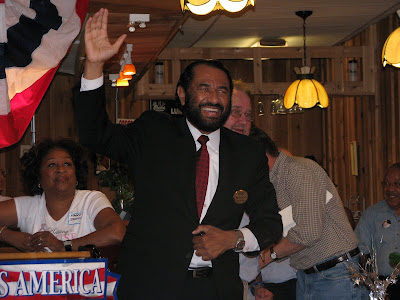 Then, winding up the evening was the keynote speaker, Congressman Al Green. Green, who is also known as Reverend Green, had a stirring speech that was punctuated with applause several times. He hit all the high points that are of deep concern to Fort Bend County as well as his constituents elsewhere. It was fun to hear him talk about his voting record and how he feels fortunate to be representing a district which allows him to cast his votes the way he does, true Democratic votes. He was effusive in his praise for House Speaker Nancy Pelosi, suggesting that this was another person who should be considered in the current vice presidential beauty contest. All of that, and Green also urged a straight Democratic ticket vote, a vote that would also return Nick Lampson to congress – which he also urged. Without 218, Green proclaimed, you don’t get to set the agenda, and we Democrats need to set the agenda.

Well, that’s about it. After the last speech of the evening, the party goers slowly filtered out the door, but it looked like some were going to stay all night. This was finally put to an end with Skip Belt’s booming voice telling everyone to “Go home now.”
So we did.
Posted by Hal at 4:51 PM

Yep - Ole Bubba got a haircut for this special occasion, which was a good thing because I thought for a while there that Rev. Green was preaching Bubba's funeral.

By the way, Wanda's tee-shirts are such hot sellers that they're going into a second printing.