On Democrats and Crucified Frogs 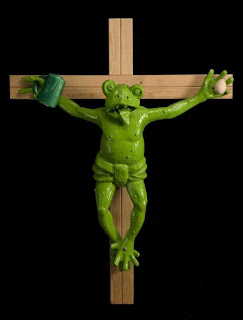 We have an object lesson to learn today. A lesson we need to have. A lesson from no less than Pope Benedict XVI. Democrats need to learn from the mistake of Pope Benedict when he sent a letter to the new contemporary art museum in Bolzano, in northern Italy, Museion, asking them to take down a piece that depicts the crucifixion of a frog that is holding a mug of beer in one “hand” and a chicken egg in the other.

Pope Benedict took offense with the piece, who said in his letter that the piece “offended the religious feelings of many people who consider the cross a symbol of God's love and of our redemption.”

Now, here’s the thing. Up until the Pope’s plaintive yelp over this work of art by the late German artist Martin Kippenberger, neither I nor probably hundreds of thousands, or even millions of people would know, would ever have known of the existence of this contemporary work of art.

But now we all know, especially now with the news that the board of directors of Museion just voted, and the frog piece stays.

What should Democrats learn from this? If the opposition wants to spend thousands and millions of dollars to get their message to the voters, that’s up to them. Democrats can do the same. But when Republicans are voiceless we need to remember not to give them one. Now I’m not talking about the blogosphere or the media. Of the former, only political blog junkies read political blogs and they know all the players already. Of the latter, well, that’s their job.

The DCCC keeps calling me asking for a handout. And I keep telling them not to call me anymore. The main reason I have a bone to pick with them is that their tactics of support for congressional candidates is not one of promotion of the Democratic candidate. They spend money airing ads that publicize the name of the candidate’s opponent.

That wouldn’t be too bad if they publicized the opponents in a negative aspect, which is what they do, but what is bad is when opposition candidates have not spent one dime on a TV spot promoting themselves.

Now I know that there are laws that prevent the DCCC from promotion of a Democratic candidate, I may be blond, but I’m not that dumb. What I am saying is that if the DCCC wants to help out, maybe they can find another, a better way that doesn’t involve giving the opposition candidate name recognition.

As the doctors have to say when they take their Hippocratic Oath: