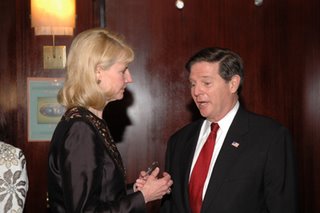 According to KHOU’s political analyst, Bob Stein, this could be a pricey undertaking, and all for just one race for one office:

“The cost is not inconsequential, probably around two million dollars. . . . to fill her unexpired seat. And I don’t believe there will be anything else on the ballot”.

“Well, these issues are something that are done in the charter. It’s the city charter and really, we don’t have much control over that. It’s just unfortunate, but it’s part of the city charter.”

Did I get that right? It’s the city charter that’s doing all this? The city charter? Not Shelley? The city charter made her file her name in the special election? Finger pointing will get you nowhere, Shelley. We all know who is ultimately responsible for Houston taxpayers shelling out another $2 M, don’t we? Tom DeLay.

That’s actually true. Tom is the gift that keeps on giving. If he hadn’t cut and run, none of this would be happening, and Houston would be able to spend those 2 million DeLay Dollars on filling some more potholes.

Two million dollars. That’s a nice chunk of change to buy Shelley a 2 week stay in Washington DC as the duly elected congressman from TX CD-22.

Works out to a million dollars a week. Assume an 8 hour day, 5 day week (a reach for some of these bozos) and we’re talking two hundred large a day, or 25 grand per hour, $416 and change per minute, or about $6.94 per second.

My bet is that Houston voters, upon seeing the extravagant waste of money her election will produce, will reject The Pink One.

Or at least they should . . . but no one has ever accused Houston GOP voters of having a logical thought process.
Posted by Hal at 7:33 PM