Kinky Gets a Bodyguard 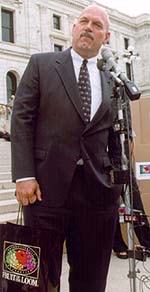 It could be that the Kinkster is feeling apprehensive about his negative press. People are crawling out of the woodwork with all sorts of past and present racist remarks that he is making or has made sometime in his life. They're a little mad and are demanding apologies. These days he’s got this big huge guy traveling with him.

Or is it Jesse Ventura?

Yep, that’s Jesse Ventura. Ventura is a former pro wrestler who made a run for the governorship of Minnesota as an independent candidate, and won. I mentioned Ventura in a posting about Kinky this summer. Kinky and Jesse have a shared experience in that both are nationally-known personalities who are eminently unqualified to act as the chief executive of a state government.

In defending his remarks, Kinky inserted another boot in his mouth in his assertion that “I am not a racist, I am a realist.” Well, now, just what does that mean? That racists are irrational people who rage against a race because they are ignorant of their good qualities, but that his remarks are based on a foundation of sound facts? So Kinky’s remark that Katrina victims are all a bunch of “crackheads and thugs” is based on sound and impartial observations and facts?

Kinky is not at his best when he is serious. Actually, he is a disaster. He needs to stick to the jokes. People don’t take him seriously when he tells jokes, so they don’t know what to think when he is being serious. The common question asked: is this a joke or is he being serious?

“Every state should have same-day registration. Why should it be hard to vote? Why do Democrats and Republicans want to make it difficult to vote?”

It is this bloc of voters that are Friedman’s target audience. People who don’t regularly vote. Oh boy, that is the kind of people I want to elect my next governor.

Well, in answer to Ventura’s question, Democrats are in favor of as few restrictions on voting as possible. It is the antics of Republicans that clearly show who is in favor of disenfranchisement, especially disenfranchisement of those least likely to vote Republican - the elderly and the poor. And Democrats haven’t had a whole lot of say in how Texas runs its elections lately. But then, Jesse is from Minnesota and maybe he wasn’t straight in his facts.

Or maybe he took a few too many blows to the head in his former career.

By the way, Kinky freaks, don’t bother submitting comments to this posting. This is a clean site (well, relatively clean – at least the language is mild) and I’ve already let you have your rants in the previous posting.
Posted by Hal at 7:16 PM