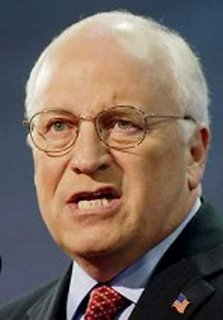 Well it’s out all over that “Deadeye” Dick Cheney is coming to Houston in early October, and that he will use one of his days out here stumping and fundraising for Texas CD-22 special election candidate and general election write-in candidate Shelley Sekula-Gibbs.

So help is coming in the form of one of the most detestable, deceptive demagogues that the Republican Party and the Bush government can send. But no $3 million.

Heck, you might say that Shelley Sekula-Gibbs got Dick from the White House in terms of campaign support.

The Fort Bend Herald reports that “Deadeye” Dick has done this once before in CD-22 when he raised a cool half a million for Tom DeLay in December 2005. And I guess Tom is putting that money to good use in his legal defense.

But everyone likes Dick, don’t they?

Well that has to be true. The race is important and it can be won. This is so obvious. So obvious that instead of sending $3 million in cold hard cash, they send Dick. She wanted the $3 million, but she got Dick instead.

What is the Lampson campaign going to do about this? They could really paint Iraq all over Shelley, the one who hasn’t really stated any opinion at all about the Iraq War. Having Dick “It Was Right Thing To Do” Cheney in her camp will give everyone a clear idea what she thinks of Bush/Cheney/Rumsfeld’s war. So what are they going to do? Well, I’ll tell you one thing they won’t do is Dick. They won’t. Lampson campaign manager, Mike Malaise says this:

"We're not focused on that kind of thing."We're focused on getting our message out to the voters"

“That kind of thing”, I guess, is waving the Cheney Flag over Shelley.

Contrast this to yet another congressional race in Washington state. The Los Angeles Times is running a story that Darcy Burner, Democratic candidate for Washington’s 8th congressional district, is having a field day over Karl Rove’s appearance, last Friday, in suburban Seattle where he headlined a fundraiser for freshman Republican Rep. Dave Reichert.

Reichert got Rove. Shelley got Dick.

Laying low on this, Reichert did nothing to publicize Rove’s visit. But Burner was on it like white on rice. Reichert is a moderate Republican, so Burner went on the attack to expose to voters the differences between her and her opponent vis-à-vis the Iraq War.

When you look at the two races, you can see why the Lampson campaign is soft peddling this visit. The Washington CD-8 race is a toss-up to slightly Republican-favored. Nick is running against a Libertarian and 3 write-in candidates. If I were Nick I would be getting out the positive message, too. Let them fire the first negative campaign shot (and you know it’s coming). 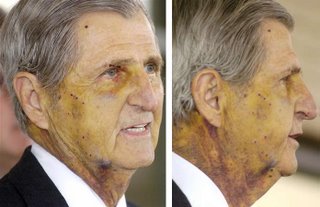 And you know, you also have to wonder why Dick is coming to town. I mean REALLY coming to town. Houston is the capitol of the oil patch, and Dick has his ties in all of that. I suspect he’ll also get to shoot a round of golf, maybe go out in the field and blast a few doves out of existence.

It’s early yet, people. Avoid Dick Whittington's fate (and face). Go out and buy one of those neon orange vests. Get one before October 3rd. And for the truly alarmed, go find some Kevlar.
Posted by Hal at 6:54 PM

How did the word "dick" get to mean "little or nothing."

Huh. Let's all ponder that together.

Remember when they took away Tom DeLay's license to carry because he's under felony indictment? No reason I brought that up 'cept it seemed like a good time to mention that guns and Republicans don't mix well.

Well, Shelley is getting Dick.
Better than gettin shot!

I think Shelley deserves Dick as much as she can handle!It serves her right!She has enough money she just needs Dick!