We have this paper in the Richmond-Rosenberg area, in Fort Bend County, Texas, called the Herald Coaster. Today they ran an article that you can read online about Thursday’s Fort Bend Republican Party executive confab.

“The Democratic Party in Fort Bend County this year is well-funded and has been highly active”.

Here are each of their sob stories.

"The Democrats are working hard - extremely hard - and it's scary. So I come to you asking you to please continue to work with us".

Annie is scared of our hard work? That makes me glad.

Bud Childers, the one running for Judge of County Court at Law #1, “urged his party to offer financial support for its candidates”. I’m not sure Childers himself needs the money, but heck, maybe the guy is hurting.

Jeff Council, the one running for County Treasurer, says that the Republican Party needs to get the Republican vote out, "because we are seeing the Democrats are working hard." Yeah, Council is one of those fat cats, money doesn’t seem to be an issue. Maybe hard work is an issue with Council.

Ken Cannata (aka Stealth Republican), the one running for Justice of the Peace in Precinct 3, has a problem with Republican image. He told the executive committee that

"Over the last three to four months, the Republicans have not done well and the Democrats are having a field day".

John Zerwas, the city boy anesthesiologist running for state house in a very rural district, apparently doesn’t have a problem with his opponent, but does have a problem with the party under whose banner he is running for office. Zerwas said that “his biggest concern with the race is his own party”. I guess John is feeling the pinch of being on the side of shameful greed and corruption. I wonder whether John is running as a Republican because John Kerry’s campaign didn’t thank him enough for his contribution in ’04.

Rick Perry, the governor of Texas, was not at the meeting but Charlie Howard, who is running unopposed in his district, mentioned that even Richard Perry has expressed concerns about the state of the Republican Party in Fort Bend County.

So State and local Republicans are running scared. Scared of the nasty Democrats who are highly active and well-funded.

Well, as one of those active Democrats, I can say this: yes, be afraid, be very afraid. We are working with righteous wrath and we will crush you. We will bury you in your own lies, deceits and corruption. We won’t have to dig the hole, that you have already done for us, thank you very much. All we have to do is spade it back in.

But where in the H-E-double-hockey-sticks did the Republican candidates get the impression that we were running a well-funded campaign? We just do the hard work. We block walk, phone 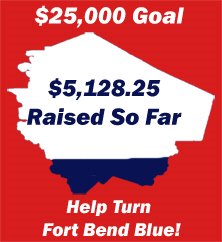 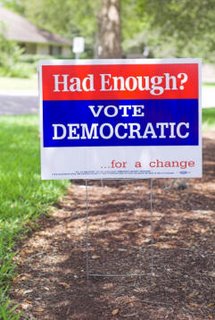 bank, and fund raise. I myself just got off the phone talking to a couple of hundred people from Vermont to California today about our highly visible race. Guess what? They all knew about it. We don’t call the PACs and the fat cats, just average Joe Voter. It’s hard work but I think it will pay off in the end.

By the way, if anyone reading this wants to get in on the action you have a couple of places you can go. Click on the Help Turn Fort Bend Blue graphic and help us get a television ad aired on in the greater Houston media market. Or click on Juanita's “Had Enough” sign and adopt one of these beauties from Juanita Jean.
Posted by Hal at 7:19 PM